Preston has been loving preschool. Like really loving it. He had a little bit of a hard time on the first day and one more day the following week but since then it's been great! We were using a reward system the first couple of weeks but now Preston just knows whats expected of him at school and we haven't had to reward him and he hasn't had any more outbursts at school!

I know that just typing that makes me smile! And breathe a sigh of relief!

I had my first day volunteering. It was so much fun. I loved watching Preston in class. It was like seeing a whole different side of him. The big boy side! It was so much fun watching him interact with the other kids in his class. And to see how much concentration he put into the projects that did and learning all that his teachers were teaching him! Just watching him participate was exciting!

Plus I got to take pictures of Preston at school! 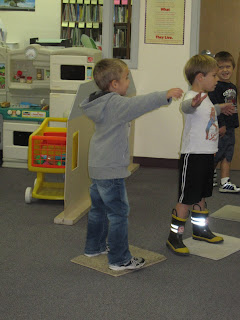 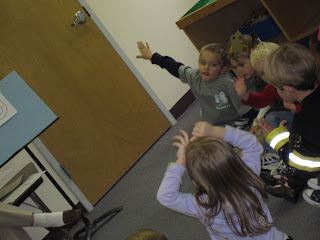 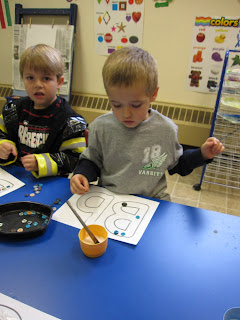 But holy crap was I exhausted by the time the day was over! Gave me a whole new level of respect for preschool teachers!

Preston's class does show and tell too. Preston's day is Tuesday. He can bring anything that he wants (well almost anything, I refuse to let him bring swords or Nerf guns or anything that seems a little less than appropriate for a preschool show and tell). But we are encouraged to encourage our child to bring something that relates back to the letter they are focusing on that week or the Bible story or the theme of the week. Some weeks were on top of it and other weeks he just grabs something that he really wants to bring and we call it good!

The first week he brought his "fastest race car" even though it didn't fit in with anything. But it is Preston's most prized possession. It's his absolute favorite hot wheels car and it's green which is what makes it so fast!

My volunteer day just happened to be on the first day of show and tell so I had the luxury of getting to watch Preston's first show and tell. It went a little something like this, "This is my super fast race car. It's green. I love it. And Mommy says I don't have to share it because it's special!" Hilarious. And a little embarrassing! And totally true. I'm a horrible mother who doesn't make her son share his "fastest race car". I mean it's super fast, you can't share that kind of speed!

One of Preston's rewards for being good at preschool was going mini golfing. Brad was working late that night so my brother tagged along with us. Preston was so excited! We've only taken him mini golfing once before but he had so much fun and had been asking to go back so using it as a reward for being good at preschool seemed like a brilliant idea.

We rode the go carts first. Me and Preston totally kicked my brother's ass, except that we totally didn't. But in my defense we were in a double and he was in a single so his was faster. 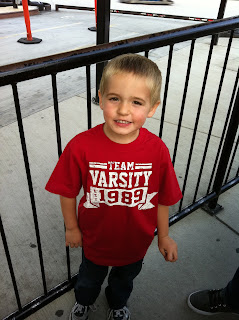 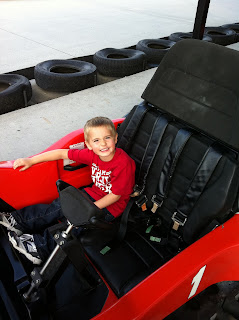 Then we went in and played some air hockey and some of the arcade games. 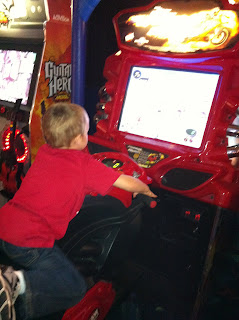 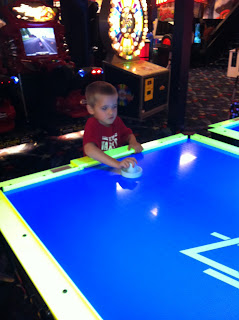 Matt couldn't stay for mini golf so me and Preston were on our own for that one. But we had a bunch of fun!! 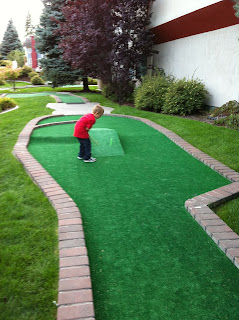 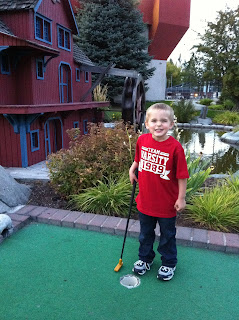 I hate to say it a little bit but Preston was better at it than me. Like really better than me. I even lost my ball for a while in the bushes. Preston on the other hand didn't lose his ball even once. He also got a hole in one. I'm trying not to be bitter about that one. Ha!

On top of having fun celebrating Preston being good in preschool, I realized that mini golf needs to be a good at preschool for several months kind of reward rather than a good at preschool a couple of times kind of reward. I came to this conclusion after we spent $50 riding go carts, playing video games, and mini golfing. BUT I think that this reward was the one that got through to Preston the most about what was expected of him at preschool so I'm thinking that it was a very well spent $50!

I had Mason with me on Tuesday when I dropped Preston off for school so I was a little bit nervous about how he was going to do about going to school when he knew that he could be playing with Mason. Drop off took a little bit longer and I had to promise him that Mason would be with me when I picked him back up.

I then spent the rest of the time stressing out that because he knew that Mason was with me he would act out in hopes that he would get to leave school to hang out with his cousin.

It all went great though. All that stressing for nothing.

And it was worth it to see how excited Preston and Mason were to see each other when we picked Preston up from preschool. They even did little happy dances. Completely adorable!

Today Preston even had his first preschool play date! One of the little boys in his class invited us over to play! Preston and Cio had a blast playing together! And it was exciting for me to see that Preston is really making friends in his class and to get to watch the two boys play together! Plus I got the chance to get to know one of the other preschool Moms while the boys were playing.

So far we are both really enjoying preschool!!