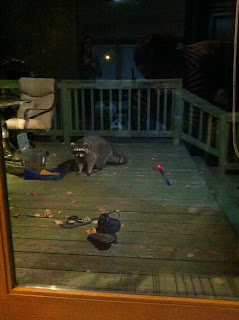 I had just put Preston to bed when I was picking up the kitchen and noticed it. I will admit to being a complete and utter city girl at this point. I was so excited I raced down to grab Preston so he could see the raccoon too. And then we both stood in front of the door watching for a few minutes before I pounded on the door to scare it off.

Brad grew up on a farm and therefore does not think that raccoons are fascinating and insists that if they show up (they did once before years ago) we are supposed to scare them off because they are dangerous to our cats. And I KNEW when I told him about our visitor he was going to ask me if I scared it off so I had to be able to say I did. And yes he did ask, it was the first thing he said to me when I told him about the raccoon.

Then the thing came back again last night! Only this time even earlier than it did the night before! So this time Preston was already up. And my little sister was here. Which means I was not the only city girl in the house. Shannon was so excited she army crawled across the floor to the door to take it's picture!

Not that she needed to.

It was much braver last night than it was the first night. And actually didn't appear to be afraid of us all that much. We pounded on the door. I cracked a window a teeny tiny bit and yelled at it. It just kept coming back.

So we kept taking pictures and watching it. The pictures don't even do it justice. The thing was huge! 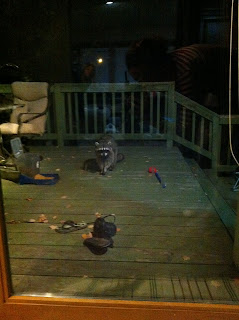 Preston appointed himself raccoon watchman and stationed himself on the kitchen counter and watched out the kitchen window for the raccoon. He notified us of everything it was doing. When it was leaving. When it was coming back. And once we scared it off whether or not he thought he saw it's shadow in the yard. Poor kid, he's going to be a city kid who gets all excited about things like this just like his Mommy!

Now Preston keeps asking when it's coming back. He insisted that he couldn't go to bed last night because it might come back and has asked all day if it is coming back tonight.

So now we're waiting to see what it's going to do. And trying to figure out what to do if it does keep coming back. I'm tired of buying cat food so often and Brad is worried about our cats with the raccoon. Tonight though Brad is home so he'll get to see our little visitor if it comes back and I'm sure my raised on a farm husband will have some sort of a plan.

So now we wait.

Labels: Cats, Family, Me, Outside, Preston