We obviously took the "first day of school" photos. 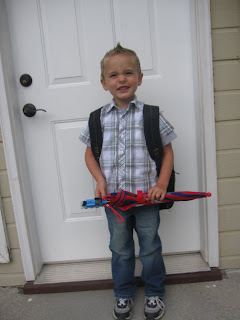 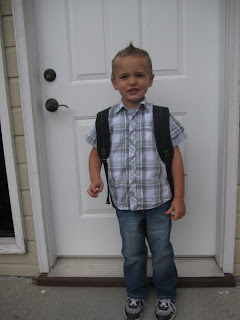 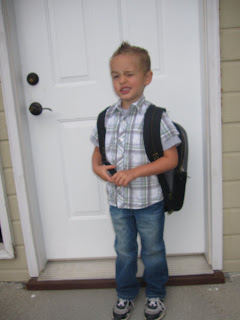 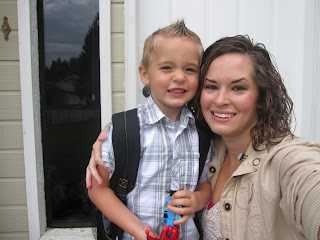 Then we headed to school.

We were a little early, so we waited outside the classroom with some of Preston's classmates. 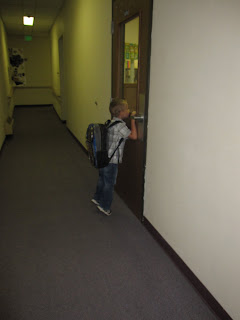 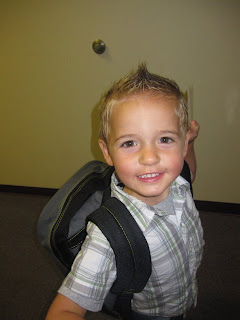 Until they opened the door and Preston raced right in. We put his stuff into his cubby and headed into the actual classroom area. I had to ask him for a hug and a kiss before I sent him over to circle time, he was that ready for preschool. After I said good-bye I watched him for a minute and he was totally fine, he didn't even look back once! 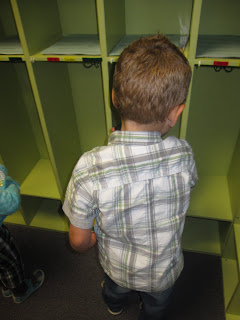 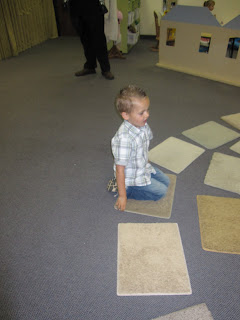 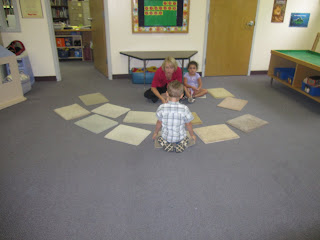 I on the other hand was not fine. I made it two stoplights before the tears arrived. How was it possible that my baby was already in preschool?! And that after all of the stressing I did about this whole preschool thing I was the one crying not him? So I headed home. Which might not have been the best idea. After four years of staying home with Preston coming home, even for just a couple of hours, without him was just weird. Luckily my sister-in-law called so I spent the rest of the time Preston was in preschool distracted.

When I got back to the preschool to pick Preston up I discovered that he had put on a good front at the beginning of the day but he wasn't completely prepared for the idea of preschool either. The teachers told me that he'd done great for the majority of the day but then the excitement of preschool had worn off and been replaced by the fact that he didn't feel like being there and didn't feel like listening to people he didn't know. Which means that while preschool had started out on a high note for Preston it had not ended on one. I talked to the teacher about what we could do to work on encouraging him to stay involved and continue to listen and follow directions even when he didn't want to. We talked about using a reward system and just really explaining to Preston what was and wasn't allowed at preschool and that he had to follow instruction and do what the rest of his class was doing. His teacher did tell me it was the first day of school so kids don't know what to expect and that was probably part of what had happened.

All that to say that I walked away from preschool at the end of the day even more stressed out than I had at the beginning of the day.

We had plans to meet our friends Kelly, Zack, and Ryan at the park for a picnic lunch so we headed there all the while talking about what was and wasn't allowed in preschool. And what Preston had learned and done during his first day.

When we got to the park Kelly helped me to laugh about the situation and listened to me whine about it sucked that this had happened and that I didn't want to have the naughty kid. And just overall made me feel better about the entire situation. Plus Preston got to get his wiggles out playing with Zack and Ryan.

Thus is how Preston's first day of preschool ended with me realizing that I have an amazing support system of family and friends. I also realized that in focusing so much on the part of preschool that I was most worried about (drop off) I'd done Preston a little bit of a disservice in leaving him not completely prepared for what to expect from the rest of the day at preschool and unprepared for what would be expected of him. It could have gone better and it could have gone worse, which I guess is really not so bad when you look at the big picture.

Awww, what a big boy he is!! I *love* his little faux hawk by the way! How is he doing now? ANy better the second day? I'm sure it will just take him some adjustment