After obsessing and searching last Spring, we are finally ready for Preston to start preschool. No seriously I was freaking out about the whole thing. I looked at five different preschools before I felt like we'd found the right place for Preston. I worried about snack time and bathroom location and how well Preston interacted with the people that we did meet when we were "interviewing" the different preschools. I worried about how close to the road they were and did they have their play area fenced and how many adults to how many students. What did play time look like. What the curriculum looked like. How far from our house were they. Could I get there easily in the snow. Mostly I just stressed about all of it. And making the right decision.

I'm sure most of my stress about finding the "right" preschool came from the fact that I do not leave Preston with anyone. Seriously. He is four years old and literally has only stayed with me, Brad, my parents, or my sisters. That's it. So the idea of suddenly trusting someone who isn't family is absolutely terrifying to me. I know I know, I'm a crazy person.

So the search for what preschool Preston would be going to helped take my mind off of the fact that Preston would actually be going to preschool. And even after we picked a preschool I still stressed whether or not we'd picked the right one. Or if the whole thing was just a bad idea. Can't I just keep him home with me forever? This whole growing up thing is not going to work for me. Thank you very much.

This leads us to Orientation Day at preschool. 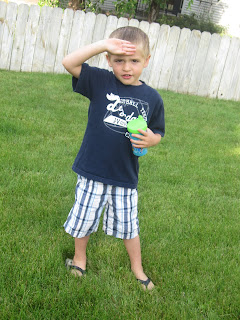 The parents were invited, and in fact required to stay the whole time. We got to meet his teachers and explore the classroom. I think it helped settle Preston's nerves a little bit because he got to meet the kids that were going to be in his class. And it helped settle my nerves to see that he was doing just fine. And to talk to other parents who were just as stressed about the whole thing as I was. Well maybe not just as stressed, but pretty close.

Preston had a great time. He loved some of the toys in the classroom, particularly the pirates and the knights. It was such a relief to see that Preston was actually enjoying his classroom. 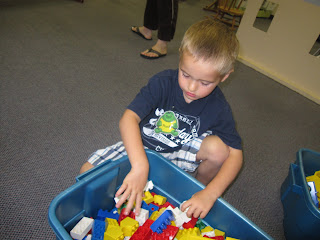 They did do a little trial run during the last twenty minutes or so and had the kids sit down for circle time while they took us parents to a different room to talk about what to expect during the upcoming year and answer any questions we might have.

When I heard they were going to pull us out of the room the panic set in. I had no idea what to expect from Preston. I wasn't sure he was going to sit down and participate if I was leaving the room and because I hadn't known that was going to happen I hadn't attempted to talk to him about it happening. In fact I'd done just the opposite and told him that I would be there the whole time. He did absolutely fine. He gave me a hug and a kiss and I told him I'd be back and that he was going to have circle time with his class and I was going to have circle time with the other parents. He got a little bit nervous when one of the other kids had a hard time but I told him he was fine and I'd be back and he settled right in. 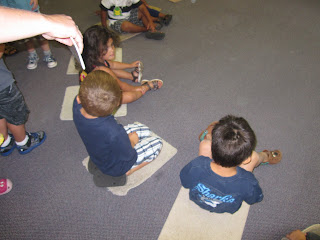 Now that orientation is over we just have to make it through the first day!