We've been trying to take advantage of Summer and what's left of it. Which has meant a lot of outside playing. And water playing! So we invited our friends Kelly, Zack, and Ryan over to play!

For some reason Preston and Zack are both loving the little splash pad. Of all the water toys we have and the pool, Preston insists that we have to pull this one out to play with. 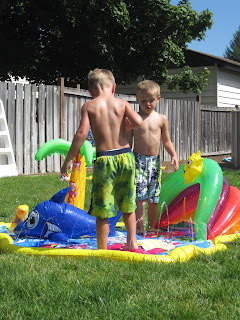 After Zack got stung by a bee, poor kid, the boys headed inside to play where it was safe. But they still wanted to play in the water so after walking into them playing in the bathroom sink and soaking the bathroom floor, I offered them the option of the bathtub. And they very excitedly took me up on that offer. Even better they were already dressed to go swimming. 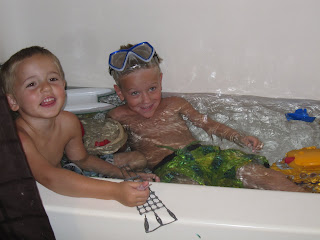 They did end up climbing out of the bath when it was lunch time. And then doing some more playing inside and outside.

But before the play date could end we had to have some ice cream! The boys both chose Iron Man popsicles and look at how cute they looked eating them! Can you tell they're friends? 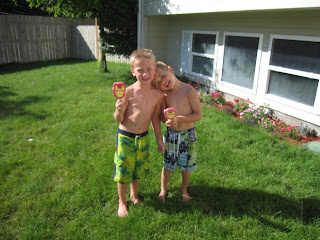 Thanks for playing with us guys!