With summer weather in full swing, we took advantage and headed up to the lake to play with friends!

I had Mason for the day which worked out perfect because we met up with my friend Courtney and she has two boys and her youngest and Mason are not even a month apart.

It wasn't supposed to be really hot out the day we went but we figured there was sand to dig in and the boys could splash in the water if they wanted too. And it ended up being hot out! It was nice! The boys played with squirt guns, dug in the sand, swam in the water. I think it would be safe to say that fun was had by all. 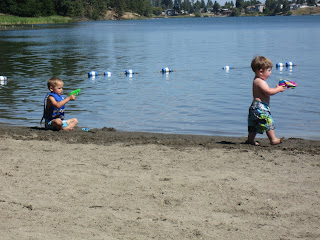 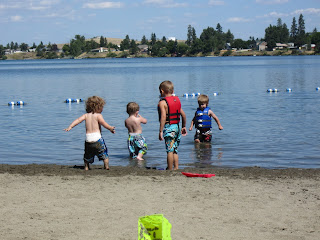 Mason kept me on my toes while we were there. He did NOT want to wear his life jacket but he wanted to play in the water, which worked out to Preston's advantage because Mason's life jacket is Spider-Man so when Mason refused it Preston "traded" him and wore it instead. But Mason didn't seem to get that if he didn't have his life jacket on he couldn't keep trying to head out to swim with the big boys. So I did a lot of chasing to keep him where he could touch. Not that he really cared, I would walk out with him and he just kept wanting to go deeper and deeper. He loves the water and didn't care whether he could touch or not! 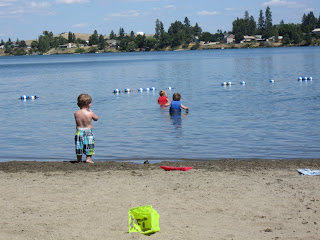 We tried to get a picture of Preston and Zeke and this was the best I could get, but I think it's so cute! And hilarious! 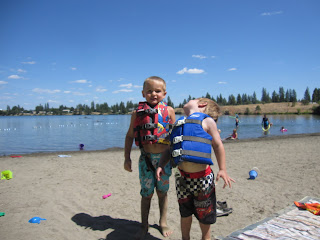 We left exhausted! And excited that we'd made it back up to this lake again this summer. The last time I was here Preston was only two and the beach and the water were so much nicer this year! We will definitely be going back!