Preston had his four year well check, now that he's a big four year old he needs to get his stats!

We had some time before our pediatrician came in so we played some matching games with an Oreo game they had in our room. Preston loved it! It definitely helped us pass the time! 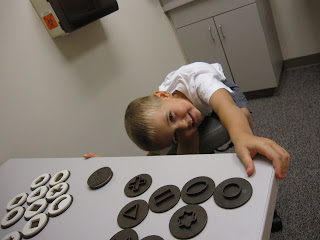 We had the typical well child check up. Nothing interesting this year. 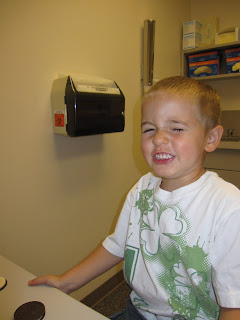 This appointment came with shots. We weren't' planning on doing them but then our pediatrician pointed out that if we held off Preston would be getting like six of them at his next appointment! That's crazy! So we got three of them today and he'll get three of them next year. He hasn't so thrilled about that. But he handled it like a champ. Not a single tear. I told him that he was getting his super hero shots and that seemed to help convince him that the whole thing wasn't completely horrible. In case you are wondering Preston now has a little bit of Batman, Spider Man, and Iron Man floating around inside of him! 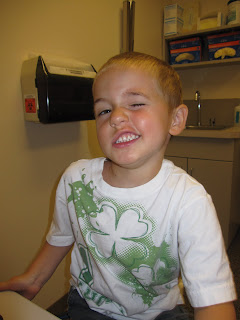 Just in case I needed another reminder that Preston is getting older, for the first time he got his shots in his arm instead of his leg.