We bought a Groupon for our downtown area and it was getting ready to expire so we headed down to use it! My Mom had bought one too so her, Marrissa, and Shannon were coming with us. Then at the last minute Brad and my brother ended up not having to work that day so we bought a couple of extra day passes and off we went.

After getting our wristbands, we started with the Spider! Preston was all for it and very excited to ride. I've always loved rides like this so I was pretty excited. We split into our groups and hopped in line. 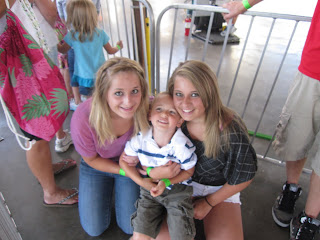 Let me tell you riding a ride like this with your child is so much different than riding it with someone else. I spent the whole time stressing out. Was Preston scared? Was he having fun? Or here's a big one...WHY THE F DON'T THEY HAVE SEAT BELTS TO MAKE SURE NO ONE FALLS OUT WHEN THE DAMN THING STARTS SPINNING?! Oh yes, I was freaking out that the ride wasn't safe enough. When the heck did I become that person, the one freaking out instead of the one who just enjoys the thrill? 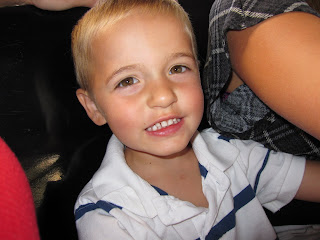 Luckily for me Preston had no desire to go on the Spider again. When I asked him if he had fun he told me yes, but that he did not want to go on that one again. Problem solved.

After the Spider Preston did the much safer Pirate Ship Bounce House. We tried to con Marrissa into going on with him and she was all set to go and then was told that she was too tall. Boo! Preston had fun though! 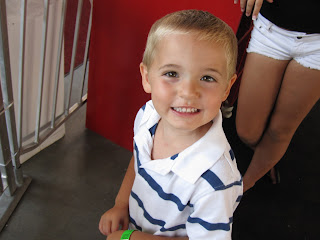 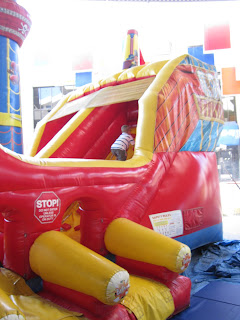 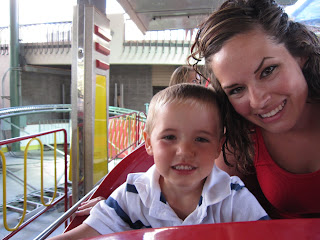 We attempted to do the Strawberries after the roller coaster, but I made the mistake of climbing on with Brad and my brother, who had decided that the whole point of riding the Strawberries was to make it spin as fast as possible and make me want to throw up. After a minute or two of that I had to tell them to stop. Not stop a little but stop all the way. Plus Preston had started to look a little green too! It wasn't all just me. But they did say they won't ride that one with me again. Jerks! Ha! 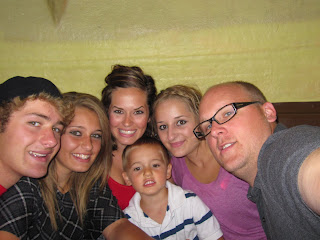 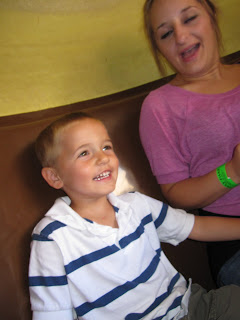 It was after lunch time by this point so we made our way up to the food court to grab some food. Along the way my Mom bought Preston a balloon sword that he was completely in love with. It was a good thing he had the sword too since it was the only thing he ate lunch with when he refused to sit at the same table as the rest of us because he didn't like the smell of all of our food. Oh yes, that's my child. 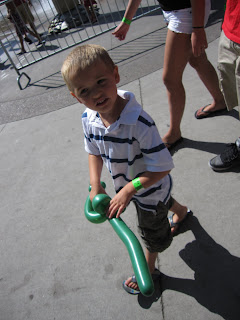 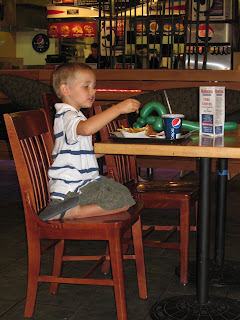 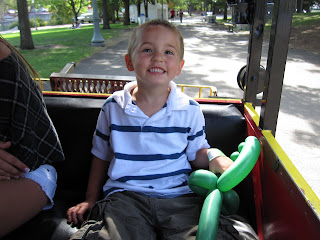 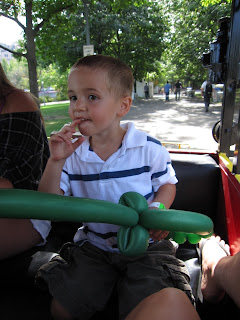 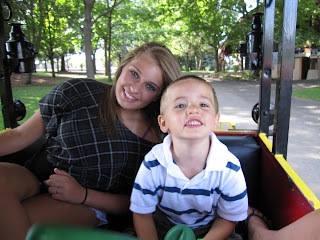 Since we still had the rest of the day left on our passes we hopped off the train and headed back to the rides.

Preston got to do bumper cars for the first time, he's finally tall enough! He loved it! And we totally kicked butt! 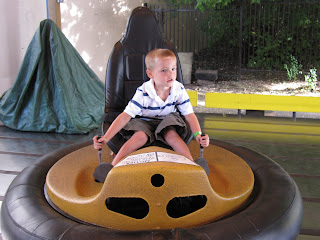 Plus Preston made a friend on the bumper cars and the little boy raced over after the bumper cars to ask Preston if he wanted to do the bumper boats with him! Preston said sure and the two raced up to the boats. Since both boys had day passes and no one else was waiting for a ride they got to just keep on bumping (ha!) until they didn't want to ride anymore! 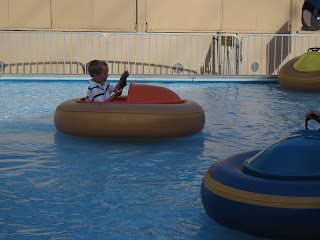 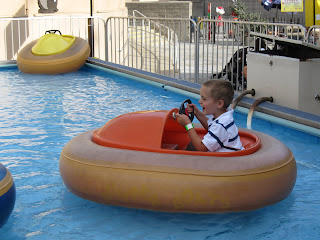 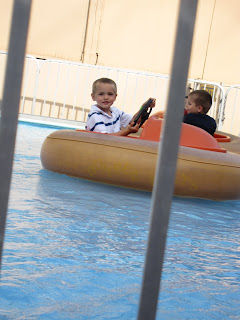 Or rather until I told Preston that we had to get going if we were going to catch the Imax.

Somehow though while we were grabbing everyone for the movie, Preston got sucked into riding the Strawberries with Brad, Matt, Shannon, and Marrissa. And by sucked in I mean he saw them in line and raced over and begged to ride with them. I was a little worried about Preston riding with them, so I might have given Brad a little lecture about watching to make sure he didn't look like he was going to throw up at any point. I was told that Preston did just fine and that he handled all of the spinning up until the very end when Brad realized that he was looking a little sick and when he asked Preston if he wanted to slow down he nodded yes. I on the other hand sat this one out and felt nauseous just watching them spin from the sidelines. Stupid Strawberries! 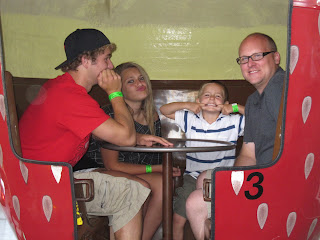 We raced into the Imax, grabbed some popcorn, and settled in to watch Roar: Lions of the Kalahari. It was good. And in true documentary style did not have the happy ending I was hoping for. That's why I usually avoid shows like this. Shows like this and Bambi, that movie was horrible!

To recover from the sadness of the lions we played some mini golf. It was Preston's first time playing mini golf and he was pretty excited about the whole thing. And actually did pretty well with the whole thing. We had to work on it a little bit but he had it down by the time we left. I'm not sure if this is in his favor or not to explain how good he was, but he was better than me! 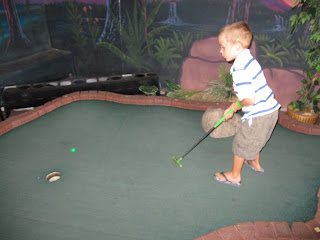 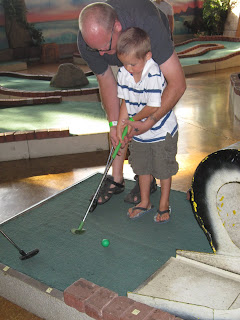 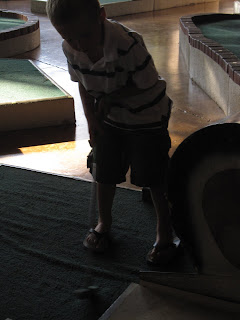 We still had some time before all of the rides closed so we hurried to do the bumper cars, the pretend your on a roller coaster when you're really only in a big tube that moves, the real roller coaster, and finished with the Strawberries. At least me and Preston finished with the Strawberries (this time I didn't feel sick, but that was probably because I controlled how fast we were spinning) while Brad and my brother rode the Spider one last time. 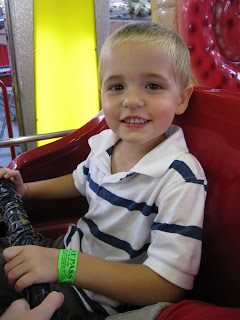 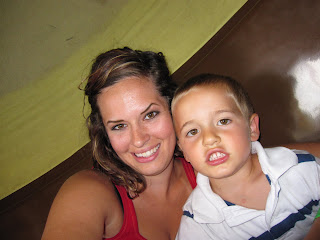 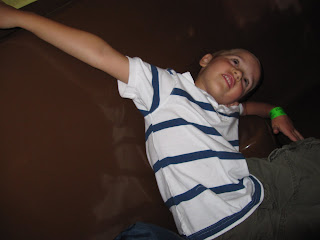 On the way to the car we passed by the carousel and since it was also included in the day pass me and Preston hopped on for a ride to end the day. 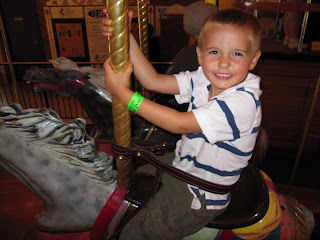 Or at least that was the plan until Preston decided that it was a better idea to end the day running through the fountain before heading to the car!

We were exhausted by the time we reached the car but it was worth it!