Two days before leaving California my Aunt invited us to come over and go swimming. I was so excited! I mean can you blame me, check out her pool area! 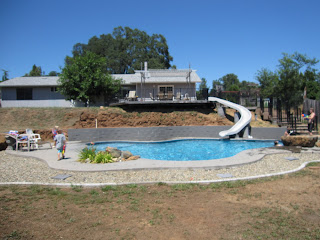 You know what else is awesome? That Preston decided that it was time to get over his fear of the water and actually swim by himself! Well with a life jacket. But it meant that he was swimming without a death grip on the neck of whoever was in the pool with him. Much more exciting. And fun for everyone. Plus Preston totally loved swimming on his own! 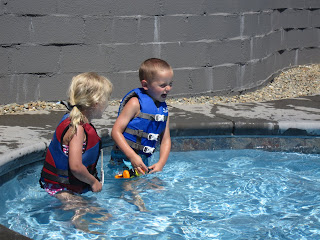 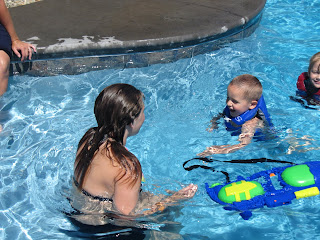 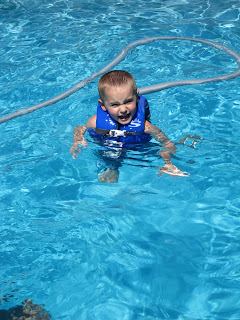 It was like he was a whole new child with his new talent. He was jumping in the water from the step in the deep end. He wasn't afraid to go under at all. At one point Marrissa asked him if he wanted to go under and he plugged his nose and said yes and she literally pulled him under the water and he still came up with a smile on his face! 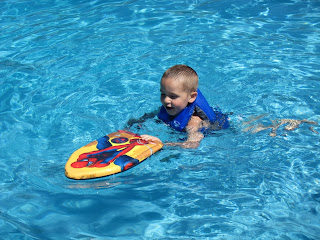 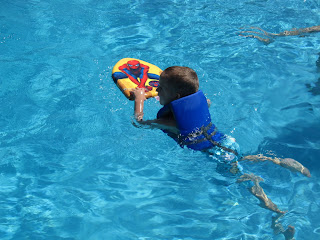 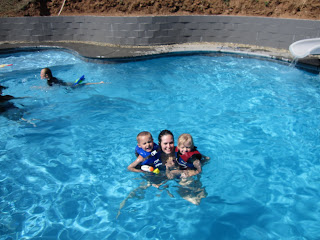 He was even brave enough to go down the slide! Yes, the giant huge slide. The first two times he actually went all the way down. He'd grab onto the side of the slide to slow himself down but he went all the way down. The first time he went under and I freaked out that he was going to freak out so the second time I made sure not to let him go under and he was pissed! He told me he wanted to make a bomb in the water and I ruined it! Ha! And then the third and final time he went down the slide, he got to the bottom and climbed off the slide onto the sidewalk and was done with the slide. But still Preston went down the slide!! 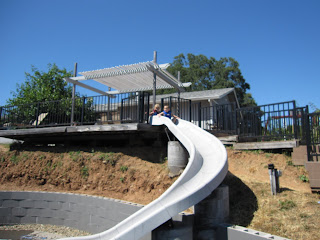 Of course he didn't decide to start swimming on his own until two days before we left California and the pools. But him deciding that swimming was actually exciting instead of terrifying meant that Brad decided to empty the dirty nasty pool that we neglected to keep chlorinated after the end of summer last year out and clean it up so that when we got home we could keep on swimming! So I will take it!