On our last day in California we went to the lake to go boating and hang out with my Aunt and Uncle and cousins. And to have fun of course!

We were pretty excited! Now that Preston is a swimmer it was going to be that much more exciting! Plus it was gorgeous out and my Uncle had taken the day off of work to bring the boat out, and Preston had never been boating before and I hadn't been in years! And just to keep adding to how awesome it was we also picked up Togo's! I love Togo's and we don't have one at home so I have to get my fill in California! 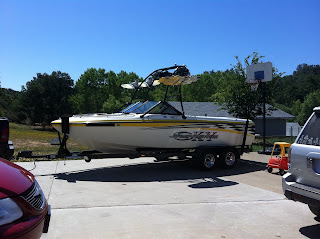 Preston decided that lake water was the same as pool water and got right in and started swimming! In fact the problem wasn't trying to convince him to swim it was trying to keep him from swimming too far out! Where did my little boy go? All of a sudden he's a big brave swimmer who doesn't need any help! 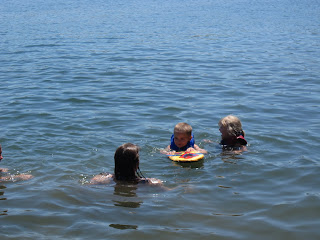 I was determined to get Preston onto the tube when we went out on the boat! I knew he would love it, but I also knew that he was not going to like the idea of it at first. So we hopped on the boat and watched Emmy do it with two of my cousins and my brother, so that he could see how fun it looked and that no one fell off! He liked watching but informed me that he was in no way getting off of the boat to get on the tube. He'd decided the boat was fun enough. 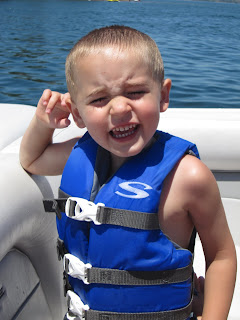 Unfortunately for Preston I'd already decided that he was getting on the tube. So after a few minutes of watching them ride my Uncle stopped the boat and two of my cousins climbed off and me and Preston climbed on with Emmy and my brother. More accurately I climbed on carrying a screaming Preston. He did NOT want to ride the tube. Not in the slightest. The first minute or two he insisted he needed to get off NOW! There was screaming and crying. It was not fun at all. But then he was all smiles. And laughing and having fun. Thank goodness too, because it would have sucked if my plan would have backfired and instead of showing him how much fun it is to tube I'd have made him afraid to ever try it again. 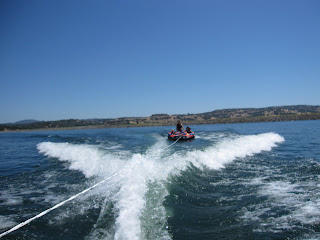 We rode the tube back to shore and had lunch and then it was time for the big kids to go out and play. And lucky me they needed someone old enough to hold onto the flag while they were riding and my Mom offered to watch Preston so I got to go out on the boat again!

Since it was the older kids tubing instead of the little kids it was time to get serious. And it was hilarious to watch! My brother talked this huge game about what an amazing tuber he is so of course I had to convince my Uncle to make sure he fell off. And fall off he did! They were riding the tube that seats three fairly safely and my Uncle whipped them around and the whole tube flipped and they went flying! It was awesome! It was just a lot of fun to watch and see how seriously they all took staying on the tube. At one point my little sister almost flew off and my brother threw his leg over her to keep her on. 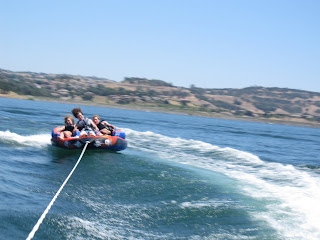 After a while of watching I called the spot of whoever fell off next. It ended up being me, Marrissa, and Matt when my cousin, Julia, fell off! I'd been watching them ride so I knew to be afraid, but holy crap it was soooo much fun! My hands hurt so bad from holding on so tight and trying not to let go. We hit so hard that I'm told we literally flew at least ten feet into the air. I'm told all you could see was the bottom of the tube. My Uncle stopped the boat to see who had fallen off, who had gotten hurt, and who was dead! Ha! We'd all flown all the way up into the air and when I felt us coming down I let go so that no one landed on top of me. Matt and Marrissa had held on but Matt's head hurt and Marrissa's elbow hurt because they'd hit on the way down. It hurt! But it was so much fun! 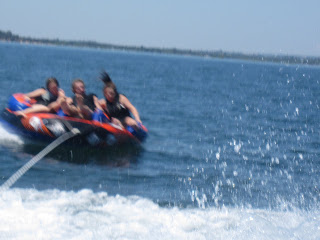 We headed back to the beach and then the older kids headed back out with the individual tubes to do some more tubing. So we enjoyed the beach and the sun. And the little ones played in the sand and then in the water. They were pretty much all over the place. We kept having to call them back. The two of them together are soooo brave so they kept heading way too far out to play and then having to swim back in. It was a good thing we were in a little cove and they had a lot of space to swim around safely. 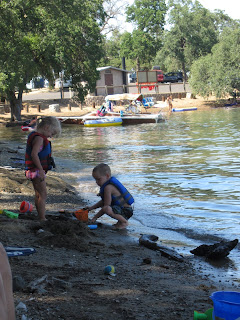 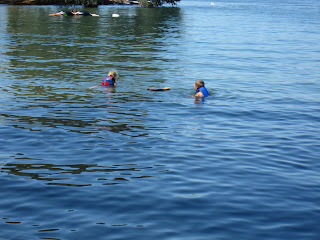 When the boat came back we headed out again. This time to do some wake boarding. Preston and Emmy wanted to come too so they headed out with us. Somehow I got thrown under the bus and voted to go first. I haven't wake boarded since before I had Preston. Like years before I had Preston so I had no idea if I would still even be able to get up out of the water. Especially since I never actually had any skill in getting out of the water before, I had some skill for the rest of it but for getting me out of the water the boat just pulled me up. But guess what? I did it! I actually got out of the water! And on my first try! Score! and after that I even started to remember what I was doing and how to do it. And how much fun wake boarding is! Once I fell though I was done. I tried to get back up but after tubing and then wake boarding that first round my hands hurt too bad to hold on. 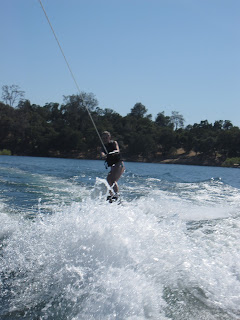 My cousin and little sister tried next. Julia got soooo close to getting up, but couldn't get it done before her hands hurt too bad to keep trying. Marrissa tried getting up too but couldn't get up either. She tried a couple of times and then threw in the towel. Then my brother was up. He'd already been wake boarding this summer so he was up right away. And up for a while. He went down a couple of times but he also got back up a few more times after falling. 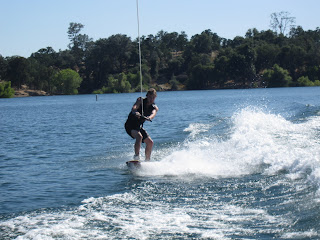 Of course with how hot it was out there was no way that we weren't going to take a break to hop in the lake in between turns on the wake board. I was a little worried that Preston might be afraid to just jump into the middle of the lake. He wasn't. Not in the slightest. I had to drag him out of the water. 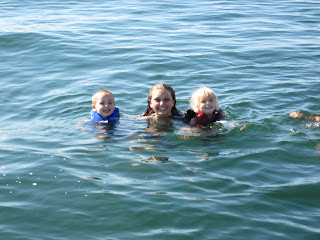 This time when we headed back to the beach it was to pack up. Our day at the lake was over. Well over after one final ride on the boat. Preston was begging for one more turn on the tube. Imagine that the child who cried when I dragged him on was begging to go again! He was so excited about it that he didn't even care if I rode with him or not. He climbed right on with Emmy, Mick, and Sienna. They got to ride back to the boat launch and Preston had a blast! He wasn't the slightest bit afraid. My little boy is just so grown up! 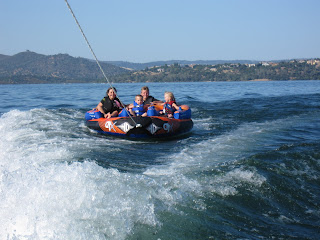 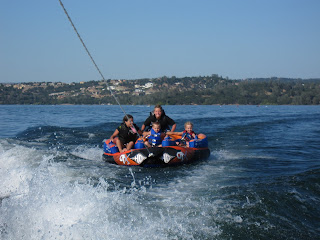 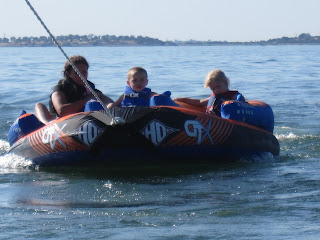