Blast From The Past 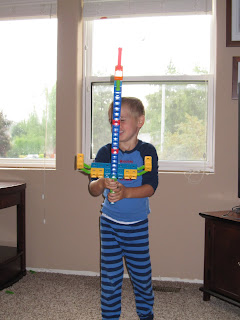 Preston and Brad have gotten pretty into a show that Brad used to watch when he was little called Thundercats. Brad was pretty excited when he realized that Preston was into it when they caught an episode together and even more excited when Preston told him he wanted to watch more! So I wasn't all that surprised when Preston built the "Sword of Omens" out of some of his trio blocks. I was a little surprised when he walked around with his new sword saying, "Sword of Omens give me sight beyond sight". A line that Lioness uses when he gets ready to use his sword.

O.M.G. I'm so jealous!!! I used to be OBSESSED with the Thundercats! Meredith doesn't want to watch it with me though:(