We did Fourth of July as more of a Fifth of July this year. Preston had gotten a HUGE sliver in the bottom of his foot at some point on the Fourth and while I got it out he got himself so worked up that he just wanted to go to bed when it was all over. We tried bribing him with the fireworks and the sparklers but he just wanted to sleep. He was over the whole day and the sliver and all of it. So off to bed he went.

Luckily he did get to do one sparkler the day before at Grandpa and Grandma's house. My sister had bought some for both of the boys and they went out back to do a few. 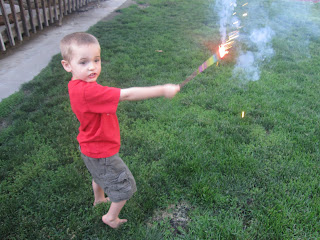 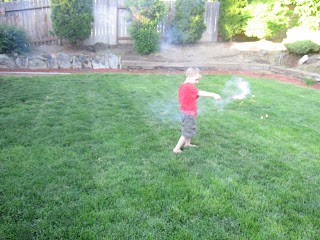 Then on the day after he was in a much better mood having realized that he had survived the sliver removal experience and that he could actually walk on his foot now. So he was up for doing some small fireworks and sparklers in the backyard. 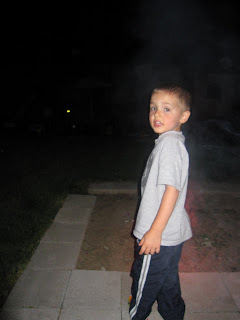 Preston was a little bit scary with the sparklers. When he'd turn to talk to you or if you said something to him he'd swing his whole body and suddenly the sparkler would be pointed at you. You had to be very specific about how he was supposed to turn when he was holding one of them! We got lucky and no one got burnt!