I went to register with Brad's cousin Lenee today for her little girl Lily, who is due at the end of September. Lily is going to be her first baby so she wasn't sure what all she needed and asked me to come along. I was so excited! I love all things baby! And I always love giving my opinion! Ha!

It was so much fun! I only have Preston so I always love getting to check out the pink stuff! Even if I don't get to buy it! And holy crap I forgot how much stuff a baby needs! We were in Babies R Us for TWO HOURS! And then we grabbed a late lunch and did Target and Burlington's Baby Depot too.

Preston tagged along too and loved that at Target Lenee let him hold the little scanner and scan the things she wanted. At Burlington they even gave him his own scanner to use! He just thought it was awesome!

When I got home today I told Brad that I can't believe that we've been together for more than six years and I've never really spent any time with Lenee before she got pregnant! How is that possible?! Even more because every time I've hung out with her I've had a great time! It's a good thing she got pregnant and I got to know her better!!

My house is still recovering from me being sick earlier this week. It was just such a disaster. I'm starting to think I'll never get on top of it.

Exhibit A: The Playroom Entrance. I had Preston pick up all of the toys around the house and throw them into the playroom. Notice the little path on the right so that we can get in there to get to the closet. 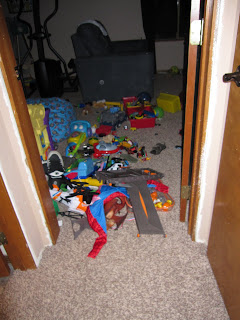 Exhibit B: Preston's Bookcase. Yep, still haven't picked those books up yet. In my defense I put them on the bookcase in a certain way so that he can easily get to the ones he likes the best, so it's a process. Yes I'm OCD like that. 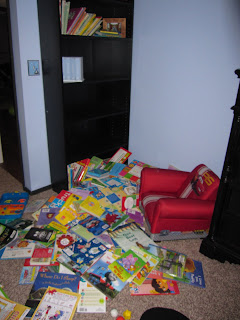 There are a bunch more things that still are trashed. Taking pictures of all of it would just be too overwhelming. And make you all wonder how it's possible that two small children did all of it.

Father's Day is coming and I have no idea what I'm going to get Brad!

We have carpenter ants in our bedroom. Yes, carpenter ants. I'm cringing even as I write that. I'm not sure yet if they are coming in from outside to look for food and snacks or if they are living in our wall. LIVING IN OUR WALL! Brad keeps using the word nest and every time he says there might be a nest in there I want to curl into a ball and die. I hate bugs! HATE THEM!

I keep going back and forth on what I think. We've probably seen and killed like 25 of them now. Which just doesn't seem like that many in almost a week when Brad keeps saying they might have a nest inside the wall. But then if you watch them (instead of killing them, which is really hard for me) they all seem to head back into the wall under the ledge that goes around the room, so maybe they are living in there. But then that wall is an outside wall and I keep wondering if maybe they are coming in from outside through the wall but not living in the wall.

We're going to call an exterminator and have them come out and look at it all and see what they think. Whether they think they are living in the wall (or somewhere else, YUCK!) or if they are just coming in from outside. And then what they think we should do with either one of those possibilities. If they are living in the wall it's a big deal and can be really bad for our house if we don't do something about it. And if they are coming in from outside we have to do something before they decide to take up residence in our house.

Wow, talk and pictures of messes throughout the house and talk of having ants. I swear we are not dirty people! Even though this post seems to suggest otherwise!

I'm curious as to what everyone else's bedtime routine looks like. Preston seems to get all wound up at bedtime. It's like the moment we walk into his bedroom he starts bouncing off the walls. And then I have to calm him down. And threaten him that if he doesn't calm down he'll lose books. Or that I won't lay with him. And I have to use my mean voice.

I hate that bedtime is like this every night! I feel like it should be a nice ending to the night!

I'm also curious how the whole bedtime process ends. Do you lay with your kids? Or tuck them in and head out of the room? Preston always asks me to lay with him but if I lay with him he doesn't go to sleep. He talks and asks questions and plays and pretty much does everything except go to sleep. But if I don't lay with him I feel horrible because he asked me too. Am I alone in this?