I upgraded my phone today!!! I got the white iPhone 4!!

I've been talking about upgrading for a couple of months, especially after my phone took a dump in April and we thought it was actually done. We'd set the money aside, but I kept putting it off because I just didn't want to pay for it when my phone was still working. But then Brad told me that Walmart had put the iPhone 4's on deal for the whole month of June. And I really started contemplating it. Finally Brad told me to just do it already; I'd been talking about it, we had the money for it, we'd actually be saving money by buying it since it was on sale, and he was worried that if I didn't do it now they would be out of stock by the time I finally convinced myself to do it. So I did it!

I am so excited!!

Me having a new phone means that Preston is now the proud owner of my old iPhone. I think he's going to be very excited about this. I know I am pretty excited about not having to share my phone with him anymore. Plus this is going to be pretty awesome in July when we go on vacation. It's going to be a long car ride and it's going to make it easier on both of us if we each have our own entertainment devices.

Right now Preston isn't excited about getting my old phone.

That's my three year old. If he doesn't go into technology I will be shocked.

While we were at Walmart, I grabbed a couple of things that I wanted to pick up because I had some really great coupons. I was pretty impressed when it was all done by how much I saved and how much I got.

We went to the park today. We had a last minute change of plans and ended up deciding to hit up the park anyways. Just because the weather looked so nice. It was deceiving. We got all dressed in Summer clothes only to throw sweaters on when we got there because of the chill.

Not that we were there for very long. Preston was a nightmare. Not long after we got there he went into a full fledged melt down. He was so out of control that I couldn't calm him down. I tried to put him in a time out on the bench and he started to get close to hysterical. So I brought him to the car and sat him in his car seat but didn't buckle him rolled the front windows down and told him he wasn't allowed to get out of the car and go back to the park to play until he calmed down. It seriously took him like five minutes to get to that point. I almost just said screw it and left. But he finally calmed down and we got out to play. Only to leave less than an hour later because it was cold and Preston wouldn't just wouldn't listen. Fun times.

The good news is that before we left Preston did get to go down the big slide a couple of times. 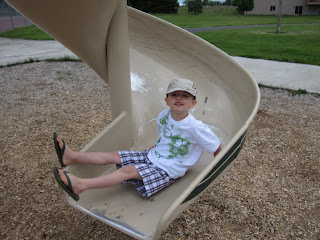 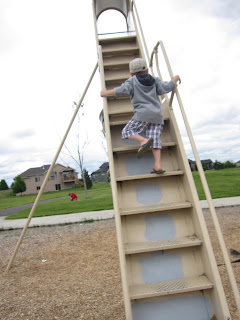 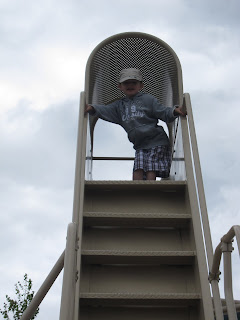 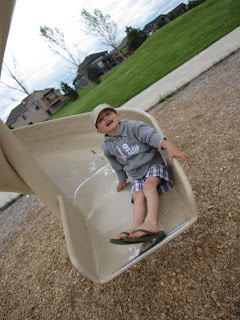 You know in between meltdowns and not listening.

Brad has worked all week so far! And he's working tomorrow! OH YEAH!

My little brother and sister graduate high school tomorrow! Holy crap! I can't believe they are officially grown ups! I swear they were just babies. I'm so excited to watch them walk across that stage tomorrow! And so incredibly proud of them!

We have a busy weekend coming our way! A busy and FUN weekend!