It's raining here. And I need to see the sunshine. Not want, NEED!

Yesterday, it even hailed. And then rained so hard that stepping outside for 30 seconds meant you would come back inside soaked. I'm not kidding. Look at what was going on at my parent's house. 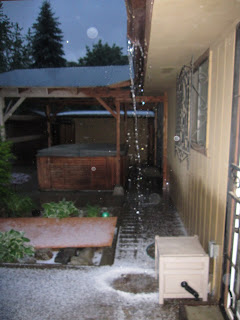 I'm whining about the rain, but Preston is loving it. Yesterday he brought his umbrella with us when we went out and kept asking if it was raining so he could use it. And then today he wore his rain boots and brought it again. And it was really raining today. He was thrilled. I would have taken a picture but you know water and electronics just aren't really a good match.

I'm blaming the fact that I like to eat. Like really like to eat. And I've decided that the world will go on if I don't look like a Victoria's Secret model. And honestly I'm starting to be okay with that. Well more honestly some days I'm okay with that and others I'm really going to get serious about working out...tomorrow! Ha!

Brad taught Preston about baseball yesterday. And Preston loves it. Today he kept telling me he wanted to go home because he wanted to play the game with the bat! And not to sound like your typical bragging parent, but he's pretty good! He can totally hit the ball when Brad pitches it to him! 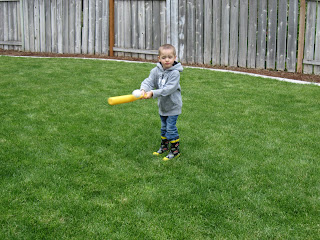 I finally bought a power cord for our portable DVD players. Just in time to send the one that I was pretty sure was broken last time we tried to use it off to get fixed before the warranty expires. Hurray!

I have a hair appointment tomorrow! And I am so excited! My hair has been driving me crazy lately and it is time to fix that. Plus my hair dresser is pregnant and I'm dying to see her baby belly!

Hahaha I love your love of pregnant baby bellies! I think you'll just have to get one of your own soon!

I cannot believe that picture from your parents house....crazy! We've actually had some really great weather here the past two weeks....I'll send the sunshine your way!