I recently read an article about how when children are willing to wait patiently for something that is better than what they already have it means that as adults they will be willing to do the same thing. Thus putting them farther ahead in life.

I was intrigued but didn't think to try it out until I read on a friend's blog that they had read the same study and tested it out on their daughter. So I decided to test Preston and see how well he would do.

I went through the cupboards and found some of mine and his favorite chocolate and pulled it out and explained the rules of the "game" to him. I was going to put one square of the chocolate on a napkin in front of him and then set a timer. He had the choice of eating that one piece of chocolate now or waiting until the timer went off. If he could last until the timer went off and not touch the chocolate than I would give him another piece of chocolate and he could have both of them. He was interested and asked a couple of questions and then I set the timer and we began. I set it for ten minutes because I figured in three year old time that was probably almost forever. 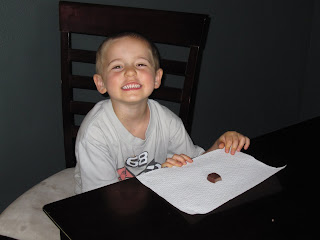 Until finally the timer went off! And Preston still hadn't touched his piece of chocolate! Of course as soon as the timer went off he asked for his second piece and shoved them both in his mouth, but I was so proud of him for being patient enough to wait for what he knew would be the better reward! 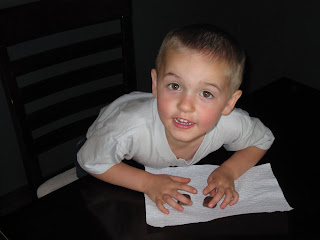 And then we both polished off the rest of that candy bar. We couldn't just let perfectly good chocolate go to waste!