We had a crazy weekend.

Preston and I headed down with my sister and nephew Saturday morning to catch some games. My brother, Uncle, and five of my cousins were playing. So we had a lot of games to catch. Especially when you factor in that my brother was playing on two different teams, meaning there were eight teams in my family alone to watch, not adding in friends that I might want to see play too. It was quite the workout getting all over downtown in the crowds and with a stroller! But so worth it. We had so much fun and I love watching everyone play. I’d been back and forth across either end of downtown several times to watch games. And Preston had busied himself with climbing walls like Spider-Man, stealing people's hats and posing with them, and racing around the courts in between games. By the time we got home on Saturday we were both exhausted. 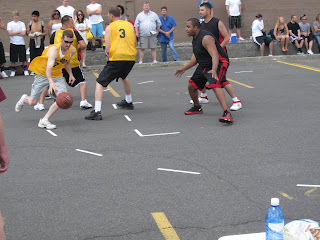 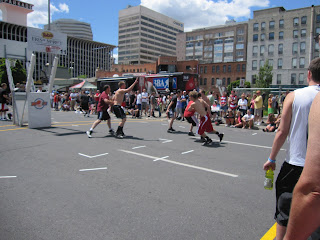 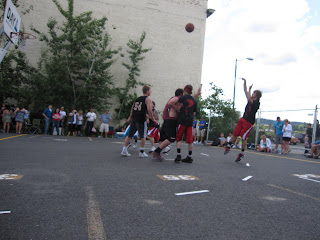 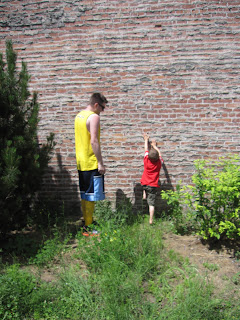 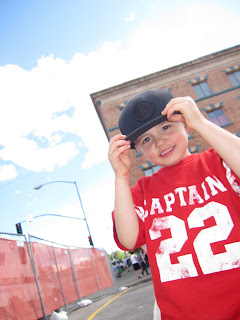 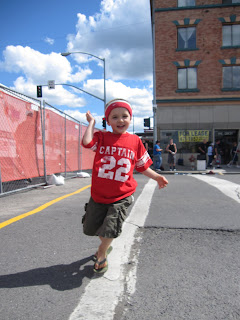 Brad was pretty tired too. He didn’t come downtown with us but instead opted to stay home and work on things around the house. He’d switched out our old front door for our new one, fixed one side of the fence that goes around our backyard, and mowed both the front and back yards. My MIL and her boyfriend had come over to help out as well, so the weeds in the backyard got pulled and I came home to the pleasant surprise of flowers planted in the front!

Sunday, I headed back downtown to catch some more games. Only this time I left Preston at home with Brad. It was a lot of work getting the stroller through all of the crowds and my brother had an early game so Preston wasn’t even up when I left. Instead I rode down with my Mom and sister. We spent pretty much the entire day down there. We got there a little before 9am and didn’t leave until after 4pm that afternoon! It was a long day. And I’m glad that I didn’t drag Preston down there. He had a lot of fun with Brad working on the front door and playing outside in the sun.

My brother’s team ended up in third place and were so much fun to watch! Seriously amazing! There were handstands, back flips, and full on somersaults during their games. Not to mention how well they played. At the end of their last game I had someone walk up to me, who had been passing by and gotten sucked into their game, and ask where they went to school and tell me that they played a great game and were a lot of fun to watch because they were so intense. It was a fabulous ego boost for the boys, not that they needed it!

The weekend ended the same way that we always end Hoopfest weekend, with a BBQ at my Aunt Sheli and Uncle Trav's house to celebrate the weekend and unwind. And unwind we did. Preston raced around with my cousins and Mason. While me and Brad enjoyed getting to relax while Preston was fully entertained and contained. Plus my Aunt had the margaritas flowing in her margarita keg, so I may have had one or two or more.

Preston even got to enjoy their backyard fire pit and roast some marshmallows with Aunt Sheli! 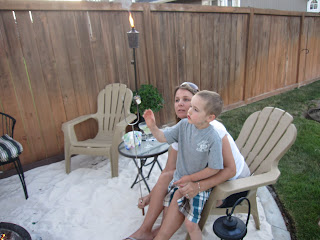 The night ended with all of us crashing as soon as we got home! Exhaustion has sunk in completely.