I bought these crock pot liners and used them for the first time tonight and they are so freaking awesome. Nothing was stuck to the bottom of my crock pot and I don't have to clean anything up. So easy!

Tonight at bedtime me and Preston had these two conversations...

Preston: "Mommy I want you to lay in here for twelve hours.

Me: "Do you know how long twelve hours is? That would be all the way until morning time."

Me: "Preston you better go na-night."

Preston: "But my eyes won't let me close them."

Brad is home again. AGAIN. Story of my life. I don't even really feel that shocked anymore when he tells me that he has a few days off while they wait for blah blah blah to start. I am so done with construction and so done with this economy.

The good news about Brad being home is that we do have a lot of things around the house, yard, and garage that will keep us all busy.

I say "my" baby stuff because Brad informs me all of the time that the baby stuff is mine and therefore it must be stored on my side of the garage.

Also speaking of the garage we have now locked our cats out of it. I don't know if I mentioned it or not at any other point but two of our inside cats became outside cats several months back. Why you ask? Because we apparently made the mistake of falling in love with all boy cats and even though we had all of them neutered their instincts still kicked in and they started spraying around the house. Particularly in Preston's bedroom on his very expensive bedroom furniture. And after months of cleaning it up and losing my mind we finally moved the Charlie and Max outside. Leaving only Monti, who wasn't peeing and is funny enough our best cat ever despite being feral, as an inside kitty.

After being moved outside Max and Charlie still continued spraying, although probably more Charlie than Max since he considers himself to be the boss of us and is royally pissed at me and Brad for not allowing him inside. Only since they were now outside they were spraying all over our garage. Everything in it was up for grabs in their opinions. My totes full of baby stuff (thank goodness I put everything in plastic totes instead of boxes, I don't even like thinking about how much they would have ruined otherwise), Brad's motorcycles, Brad's car, our other stuff, and my car windshield. We'd eventually had enough of that and now they are fully outside kitties. Brad's going to make them a cat house for the winter, but we are officially done letting them pee all over our stuff.

Still speaking of the garage, sheesh enough already, I went outside today and started spraying my totes down with bleach and cleaning all of the cat pee off of them. It was disgusting. 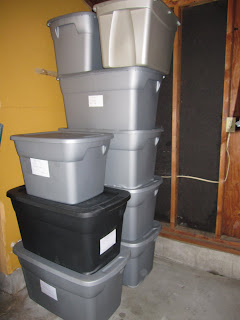 I've kept it all so that if we have another boy we have everything he needs. Or at least all of the things such as jeans, pjs, onesies, socks, gloves, cotton pants, and thermals that don't go out of style that he needs. And I'll just sell or giveaway all of the stuff that is not longer "cute" and buy those things. Although even before this other boy exists, if we even have another boy, I can't help but think that it'll be weird to see him wearing Preston's things! Yes I'm a crazy person why do you ask? Ha!

Today was nice enough that Preston finally got to play with his rocket ship sprinkler that he has been asking to play with since last weekend. He was pretty excited!

He also attempted to ride his trike to the mailbox to get the mail with Brad. But unfortunately he is way too big for his trike. Looks like somebody might be getting a big boy bike for his birthday! Shhh! 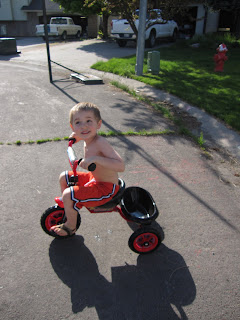 When the trike didn't work they opted to take Preston's truck instead. 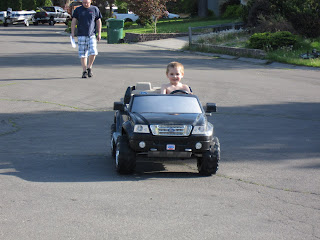 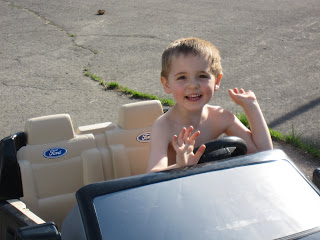 Our backyard has worms. Like everywhere. And those little f-ers are messing up my new grass. And it's pissing me off. They've managed to take new grass that was laid out last year and and make it lumpy all over. Like there are little hills everywhere you step underneath my grass. We did some looking into it and I guess it means our dirt is really fertile, which is good, but they leave their casings behind which is causing the little hills. We're trying to figure out a way to get rid of them. If anyone has any ideas I would love to hear them!

I've never heard of a yard having worms! That's interesting... and well.. ick! We get slugs. That's pretty nasty too. Especially when Greg likes to walk barefoot outside at night and steps on a slug - really makes him freak out. Lol. (I wear shoes outside)

I have a male cat and thank goodness he doesn't feel the need to pee around the house. He would quickly become an outdoor cat too!