One Of The Big Boys

Preston wants to be one of the big boys so bad. Whenever we are at my parent's house and my brother has friends over Preston wants to be doing whatever they are doing. Which is how we end up out front a lot of the time lately. So that he can chase them while they throw the football or play a little basketball with them or do some boxing. He really doesn't care all that much what they are doing as long as he can be included.

And they are all really good about including him. From lifting him up so that he can make a basket. Or tossing him the football and letting him toss it back. To helping him put on the boxing gloves and going a round with him. I'm always so impressed at how great these teenage boys are about slowing it down for a minute and letting a three year old play with them.

As evidenced when we stopped by my parent's house the other day only to find that my brother and his friends were the only ones home. Preston begged to be able to stay for a little while and play with the big boys and it was nice out so I gave in and sat on the grass to watch him. 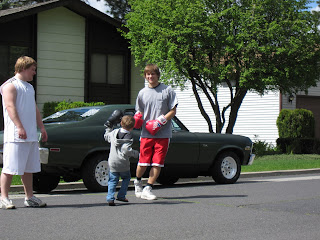 Preston took a particular shine to my brother's friend Brady. I've known Brady since he was little but I think this was Preston's first time meeting him. Not that it made a bit of difference to Preston. He was ready to play! And play they did! 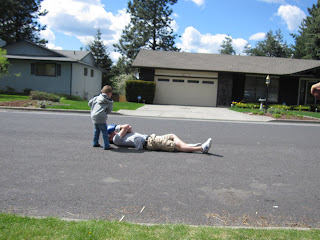 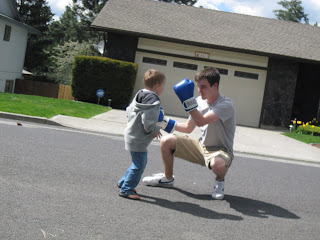 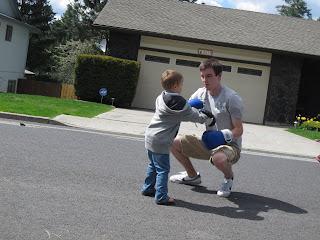 I just love watching Preston get a chance to be one of the big boys and how excited it makes him to be included in the group.