Two summers ago, me and Preston had to tackle this slide together. I had to climb up with him. Freaking out after every step that he insisted he could do on his own that he was going to fall. And then we'd get to the top and we'd have to go down with him on my lap. He loved it We had to do it every time we were at this park and sometimes more than once.

Last summer, Preston would climb up and sometimes make it all the way, but usually only get half way before he started screaming for me. I would have to head up and he would try to convince me to go down the slide with him. At which point I would either cave and we'd ride down the slide together. Or I would shut it down and inform him that it's a tight squeeze and it hurts Mommy to ride down and I would carry him back down.

This summer is apparently the slide and Preston's summer. Today he climbed up all by himself. After I warned him that I would not be coming up there under any circumstance. Once he was up there he requested that I wait at the bottom for him and he SLID DOWN ALL BY HIMSELF! The first few times he asked me to wait at the bottom to catch him. But after a couple of times I pointed out to him that I wasn't actually catching him he was good to do it on all on his own. Repeatedly.

Did I mention that he SLID DOWN THE SLIDE ALL BY HIMSELF?! 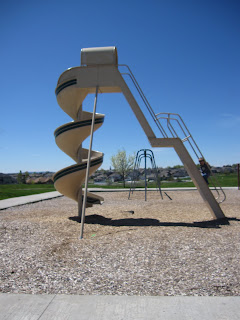 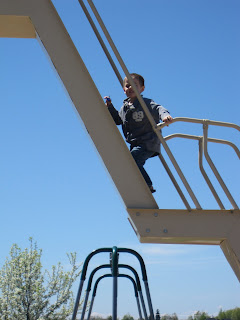 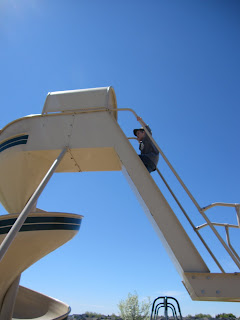 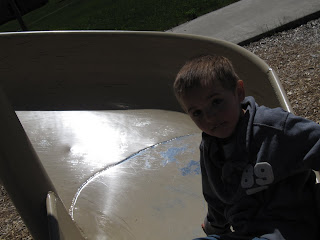 As if I needed to have it pointed out to me in yet another way that my baby boy is growing up.