Zoo And The Beach All In One Day

We couldn't go to Seattle and not go to the zoo! We love the zoo. So it was a must on our trip over there.

In fact I decided that we love the zoo so much that I bought me and Preston memberships for the year. Actually it just made more sense because we usually get to the zoo two or three times a year and if we go three times we've already saved money on what we would have paid regularly to get in. Score for saving money!

It was a perfect day for the zoo. The sun was shining. It was warm enough to be outside all day. And we were excited!

Especially this little monkey of mine! 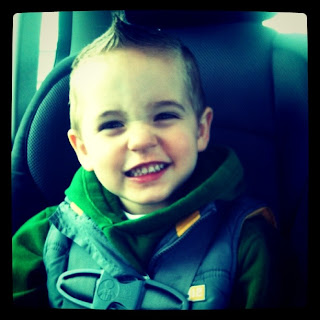 After we found parking (holy crap it was busy!), we were off. We started in the African Savannah. And for someone who insisted that he was not interested in seeing the giraffes and the zebras Preston sure did some looking. 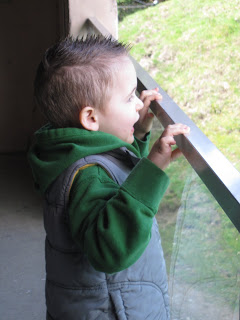 Madison was pretty excited to be at the zoo too! 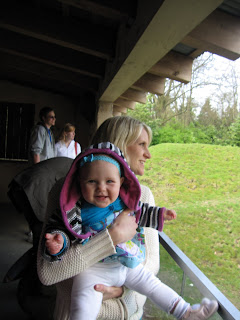 As we moved our way through the Savannah, we came across the hippos. You might remember Preston has always loved seeing the hippos. Not this time. This time he was more interested in jumping across the rocks in the hippo area. 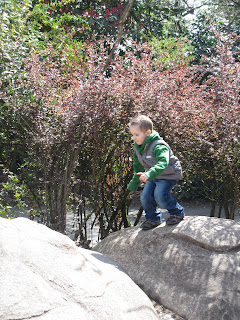 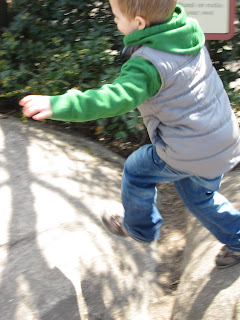 We worked our way around a couple of different parts of the zoo making our way towards the food. It was lunch time and we were all starving!

Along the way we did stop and see Elephants. Where Preston was more interested in the waterfall in their exhibit than he was in the actual Elephant. No surprise there. 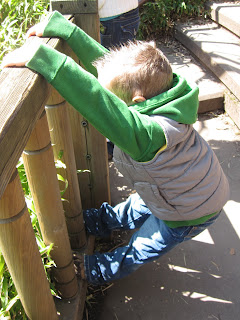 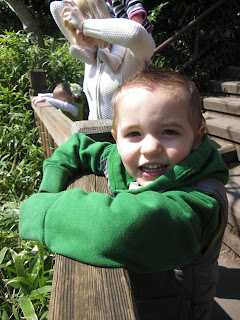 We also checked out the Komodo Dragons. Preston watched for all of five seconds and then decided that the fake one outside for climbing on was much more interesting. 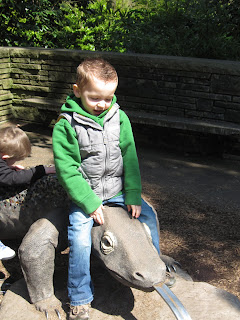 Then came the Meerkats. I love the Meerkats. They are just so cute and furry. Plus my sister used to watch Meerkat Manor and I have to admit to getting sucked in to it every time I was there when it was on. Preston watched with me for a minute and then moved on to playing in the tunnel and cave set up for the kids to pretend to be Meerkats in and just raced around the area. 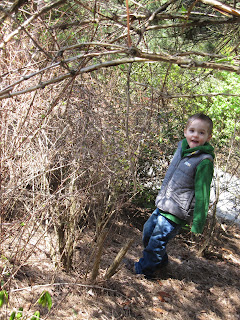 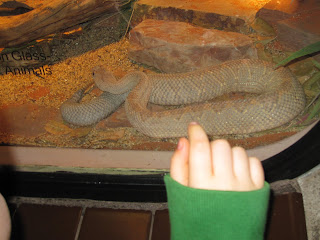 When we got to the end of the snake exhibit, they had a snake out for the kids to look at. And touch. Preston saw it and walked right up with his hands out. He thought the lady would let him hold it. She wouldn't but she told him he could touch it. He quickly reached out and poked it while she was rearranging it. Then when she told him he could pet it. He'd refused. He'd gotten enough out of just poking it. Maybe he's got more of his Mommy in him than we thought. I was literally cringing just standing that close to the snake.

While Madison ate and got ready for a nap (she was such a trooper, her schedule was completely off and you couldn't even tell she was still such a happy little girl!) me and Preston went in and fed some of the birds. No doubt one of Preston's favorite parts of going to the zoo. The birds weren't all that hungry this time but we still managed to get one to eat off of Preston's seed stick. 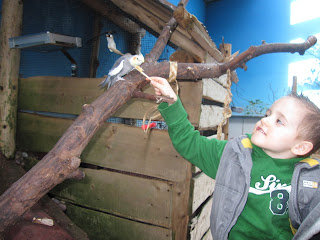 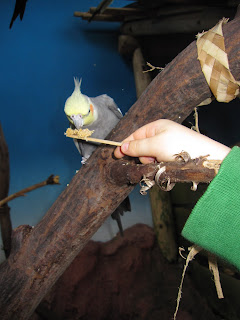 Then we did some playing while Madison finished eating. Preston was excited to just race around for a little bit. Plus we were by the kangaroos and the emus and one of the emus kept walking up and down along the fence line which Preston got a kick out of. It was so close I was terrified that Preston was going to try to reach out and touch it! 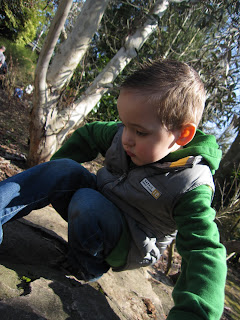 We finished up the zoo on the Northern Trail. We started to wander down and checked out the bears. They were out to play and were just wandering around the area. I was so excited! I think I might have been more excited than Preston! Ha! They were just huge and usually they aren't so active when we come to the zoo. We were rushing out of that area to head to the ZooStore before it closed when Preston insisted that he needed to take a photo on the bench with the statues of some birds. He races back down and I'm chasing after him and we get down there and I turn around and the wolves are out to play! In all the times that we've been to the zoo I don't think the wolves have ever been out to play! This time we were all pretty excited! They were so fun to watch! And three of them ended up coming out! 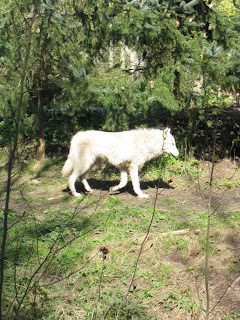 Preston did end up getting his photo with the birds before we rushed off to the store too! 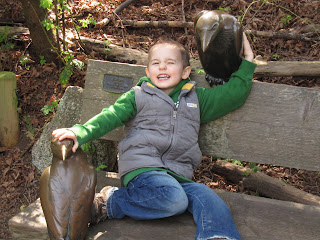 But oh no the day didn't end there!

We all headed off to a park that Jen had heard about. A park that was on the beach. It was absolutely gorgeous. We didn't play at the park because we were so excited to get down to the beach.

To get to the beach you cross over this bridge that runs over a railroad track. As we're heading down the other side of the bridge to the beach, a train comes along! Preston was pretty stoked about it. We all stood and watched, the train was jut so close!

Then it was beach time. My child loves the beach. Loves loves LOVES the beach. He was off to explore and race around and just enjoy himself and the beach! 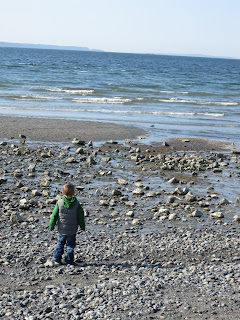 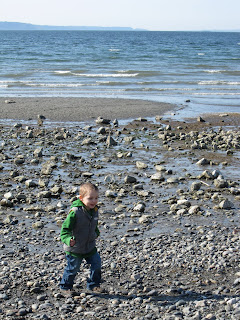 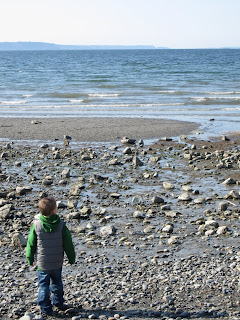 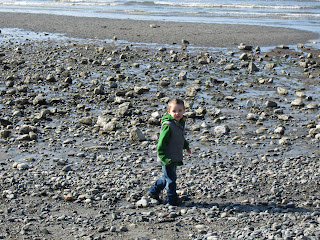 Miss Madison seemed to be enjoying herself too! Except for the cold. And it was cold! Even though it was nice out the wind was making it pretty chilly out! 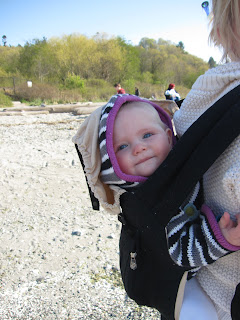 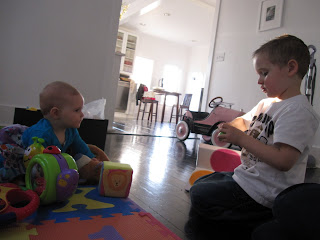 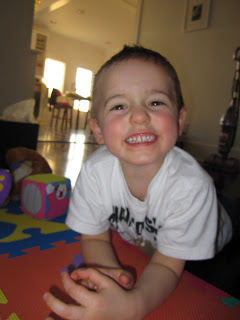 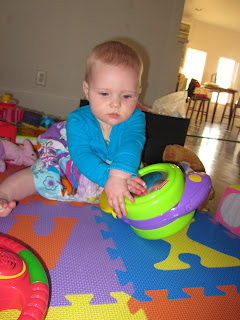 To say that everyone was exhausted by the end of the day would be an understatement!