What did we do last weekend? I'm glad you asked!

I was a nervous wreck about it. A freaking wreck! But I sucked it up and told myself I could handle it. So I grabbed my camera and ran outside to watch Zack ride it before Preston took it for a spin. Preston climbed on and I ran back into the house to grab my phone so I could send Gigi a picture because I knew she would get a kick out of it. I repeated to Brad several times that I did NOT want him to let Preston do anything until I got back outside. I grab my phone and head back outside and hear the four wheeler take off and reach the door just in time to see Preston lose control and the whole thing flip.

I don't think I have ever been so terrified in my life. I just took off running.

Preston got up crying and I just lost it. I started screaming, asking Brad what he was thinking and what part of wait for me he didn't understand. And why he wasn't right next to him, which was what he'd promised me would happen when we decided to let Preston ride the damn thing in the first place. Seriously I couldn't stop shaking and my heart was pounding.

I was told later when I'd calmed down that the four wheeler didn't actually land on Preston. It just looked like it from where I was standing. And that even if it had it wasn't very heavy. Plus he obviously was wearing a helmet. But still holy scary! Even thinking about it and what could have happened freaks me out. I think it's probably safe to say that Preston won't be riding anything like that again for a very long while!

But look how cute he looked on it... 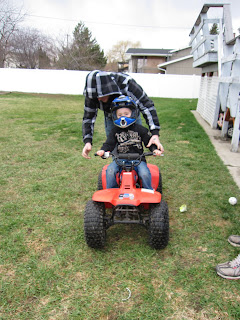 On Sunday after Ryan's first birthday and running a couple of errands, we took Preston for a walk and to play at the park. It wasn't crazy warm out but it was warm enough to get out of the house.

Preston was so excited to play at the park. It has been a long winter. And he was even more excited that both me and Brad had taken him to the park.

One of the luxuries of staying home with Preston is that I'm able to do things like playing at the park and going to Chuck E Cheese or other play areas with Preston all the time. But Brad isn't. And sometimes we just get so caught up in making the most of his days off by finishing things up around the house or trying to relax or running errands that we forget to stop and just enjoy being a family of three. Or to get our of the house as a family for something that completely revolves around Preston and what he'd like to do. He just loved that we were all at the park and racing around and I loved watching how excited he was. 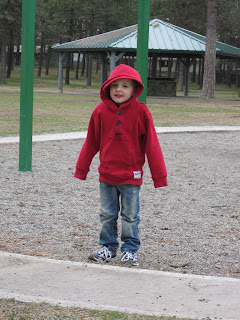 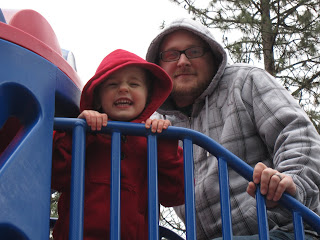 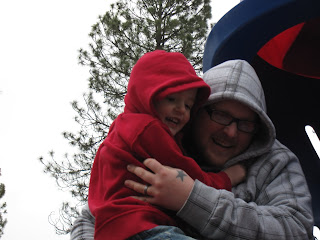 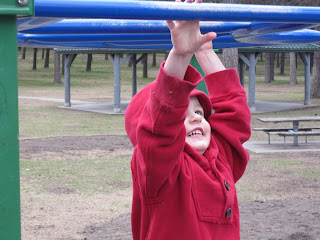 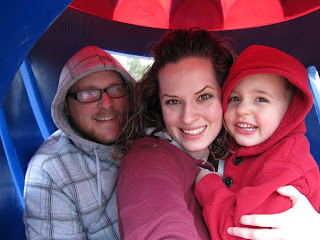 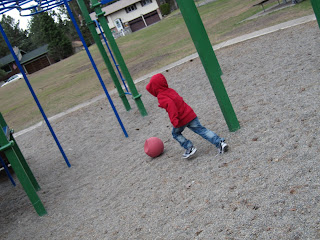 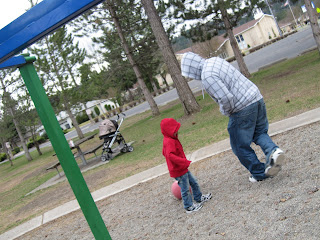 And then the weekend ended and it was time to get back to real life.

Those pics are way too cute.

Getting back to real life is such a pain sometimes.