Preston was so excited about riding the airplane. So excited that at around noon on the day we were leaving he put his "packpack" on and informed me that it was time to leave for Seattle. Poor kid. Our flight wasn't until 7pm that night and we weren't even leaving for the airport for another five and a half hours.

Luckily Brad was able to wait with us. Or I don't know what I would have done. I had my hands full enough when I thought our flight was going to be on time! We checked three bags, I was pretty proud that that was all I brought! Then I brought a stroller, the car seat, my laptop bag, my purse, and Preston's backpack all the way to the gate. It was a lot of stuff. And with the extra hour of waiting pushing us so close to bedtime I don't know how I would have survived the airport if it had just been me and Preston and all of our stuff if I hadn't had Brad's help!

Especially since Preston was not loving the wait for our plane. We'd been talking about how we were going to ride on an airplane for weeks and then spent the entire day getting ready for it. And once we arrive the poor kid has to wait and wait and wait. And in the airport. Where he gets to watch planes land and people get on and off of them. And he just keeps waiting.

And racing around. Thank goodness the airport was mostly empty and Preston could just race around and explore and get some of his energy out. 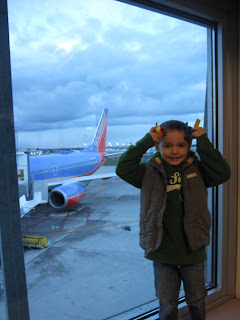 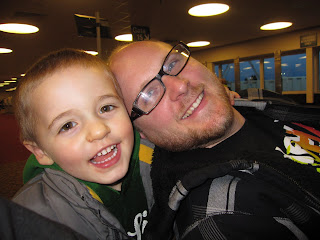 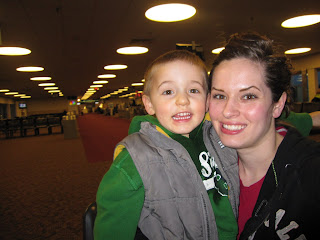 When it was finally time and our plane landed, Preston wanted to get on right away. As in immediately. He didn't understand why we had to wait for everyone to get off first. Or why we had to wait our turn to board. It was horrible. He started to go into a full meltdown. It was bath time and he'd been waiting all day to get on an airplane and now it was here and he couldn't get on it? I seriously felt awful for the people who were waiting to board with us. I could just imagine what they were thinking about having to ride in an enclosed space with him until we got to Seattle! lol

Luckily for everyone once it was time for us to get on the plane he'd gotten over his freak out and was back to being excited! And once we got on the plane he was too excited to be tired. And I think he was a little bit nervous! He kept asking why the plane wasn't taking off and what was taking so long and what they were doing. At one point he said, "Mommy, no one is flying this plane because it's not going anywhere!". lol. He was hilarious. And then once we got going and started taking off he wanted to hold my hand! So cute! And once we were in the air he stayed put in his seat and took the seat belt sign very seriously, so I told him it stayed on the entire time! He was very fascinated with being able to look down and see our city when we took off and then see Seattle as we were landing. Even the tray that he put his drink on was so much cooler because it was on an airplane! He really did an amazing job on the plane. I was so impressed and proud of him! 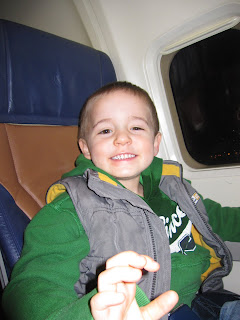 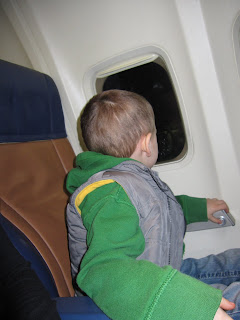 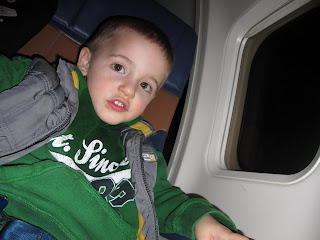 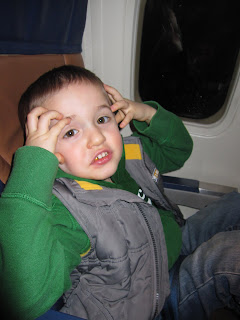 We finally landed in Seattle over an hour later than we were supposed to. And basically at the time that Preston would be falling asleep on a normal night. But he rallied! As did Miss Madison who was up too when her and Jen picked us up at the airport!

And thus began our trip!