Brad started the weekend out with a bang by waiting in line at Best Buy on Friday to get one of the new iPads. About a month ago he sold his laptop so that he could replace it with an iPad. I called him crazy since he had a full blown laptop but he swore up and down that he wouldn't regret it. Plus he reminded me that if he needed an actual computer he could use the desktop in the basement. Honestly as long as he wasn't planning on using my laptop I was good with him having an iPad instead of a laptop.

Neither one of us were counting on Preston being the most excited about Brad's new toy! They fought over it all weekend. Poor Brad. I think at first he thought it was cute that Preston was so into the iPad, but now he just wants to be able to play with it by himself! I'm loving that Preston's obsession with the newest piece of technology in our house means that I haven't had to share my phone. Score for me! 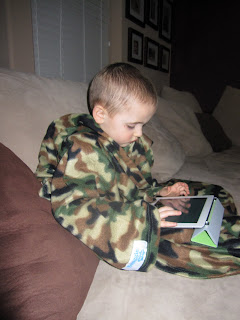 Saturday we headed down to the Saint Patrick's Day parade to meet up with some friends. It was a little chilly so I wasn't sure if it was going to be fun or just cold. But we lucked out and it warmed up so we could fully enjoy the excitement of the parade. 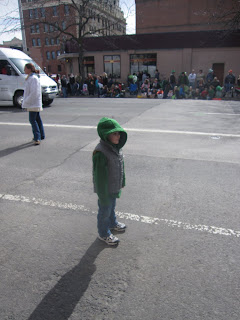 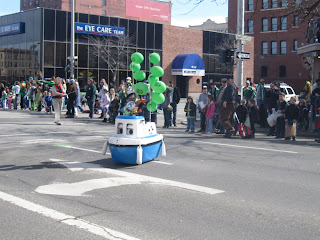 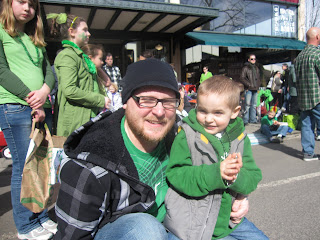 Preston and his buddy Zeke took some time to catch on to the fact that they were throwing candy. And they could in fact eat it. It was hilarious. It was the adults begging for candy instead of the two and three year old. Luckily they did catch on to the good stuff being thrown by the people in the parade. 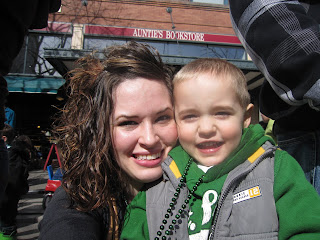 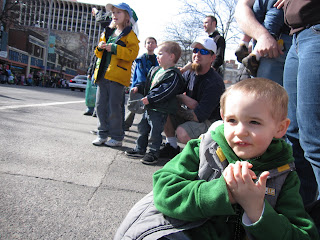 Preston got a kick out of this car with the clown police officer and bad guy in the back and asked me why the guy was in a cage. Seeing a moment to teach him that he better listen, I told him that the guy must not have listened to his Mommy. Preston informed me that I was incorrect and that the guy was in the cage for pooping on the floor! Good thing we didn't have a cage at home back when we were potty training! 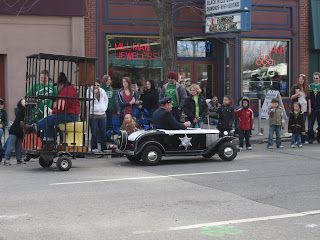 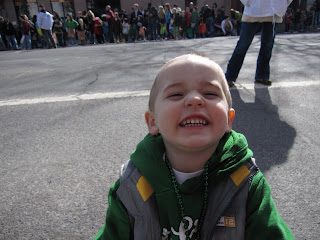 Preston did get tired by the end of it all. He was ready to leave and was too tired to even stand. He is at this horrible stage of being almost big enough to walk everywhere and still small enough to need the stroller. Which means we eitehr bring the stroller and drag it around or carry him when he gets tired. 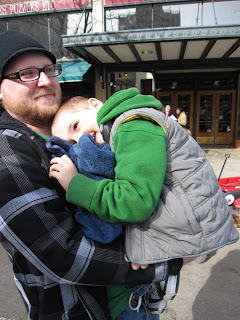 Lucky me Brad was the one who got to hold him when he got tired towards the end of the parade. He was also the one who got to carry him when Preston was just too worn out to walk the whole way back to the car! I've decided it was a well earned break for me! Ha!

After the parade we headed back towards home to grab some lunch. I wanted Olive Garden and thought that we'd get in faster at the one closer to home instead of the one downtown, I figured everyone from the parade would end up down at that one. I figured wrong. Apparently I wasn't the only one with that idea as Olive Garden was packed. Preston voted on Red Robin so we ended up there. You'd think that since he got to choose the restaurant he would have been an angel. HA! Not only was he a ball of energy but he also took his shoes AND socks off. Seriously! Every time I start to think he's doing better at restaurants he proves me wrong!

Sunday was spent around the house. I cleaned up inside and Brad and Preston raked outside since the sun decided to make an appearance. Seriously people our outside thermometer said it got up to 60 degrees on Sunday! I can't even explain how happy that makes me! Brad and I ended the night watching The Social Network. Holy crap, I didn't realize all the drama that went on with the creation of Facebook! While some of it just seemed like people trying to make a quick buck (excuse me rich twins), I didn't realize that Mark Zuckerberg was such a shit head and horrible friend! It was kind of sad.

I hope we aren't the only ones who had a great weekend!