We had a crazy busy weekend. I can't even remember the last time that we had so much going on in two days, or mostly just on Saturday. It was exhausting and so much fun. But seriously so exhausting that it has literally taken a couple of days to recover and rest up!

It all got started with Preston's buddy Boone's third birthday party Saturday morning. It was at a mini golf/arcade/fun center. We could barely keep up with Preston he was so excited to check everything out. He was horrible about staying still long enough for cake and presents. And once we released him into the arcade he had a blast. Especially on the motorcycle ride, he played that one like four times in a row! 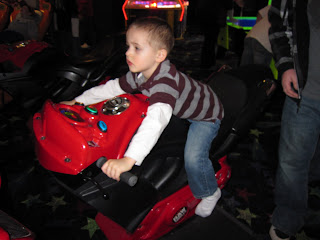 From Boone's party we went to my MIL's house. Brad's little sister was in town for prom and me, Jen, and Madison were heading down to meet up with her while she was getting her hair and make-up done. Even better Caelan had no idea that Jen and Madison were in town and was completely surprised!

Watching Caelan get all done up for prom was so much fun. And really made me wish that I had a reason to get my hair and make-up done and put on my big fancy dress. I've decided next year I'm going to chaperone, then I can be all prettied up too! HA! I'm sure Caelan would just LOVE that!

And she seriously looked fabulous. Absolutely gorgeous! Of course after we surprised her at the mall we followed them back to their hotel room so that we could see her in her dress. I'm not kidding people she looked awesome! 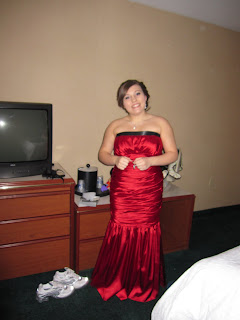 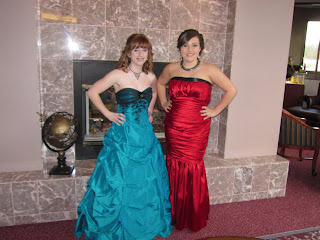 We had to rush back to Tammy's to pick up Brad and Preston and get me home in time for my sister to pick me up. Our company's office manager was turning 50 and her party was that night! Of course Jessie pulled into our driveway to pick me up not even five minutes after I got home and I was not ready to go at all. I ran out to tell her I needed a few more minutes and then bought myself even more time by bringing Mason into the house with me to play with Preston.

After dropping Mason off at his Grandma's house we were on our way to PARTY! Or course we were way early. As in I could have actually gotten ready in my house instead of in my sister's car. No big deal or anything, I loved having to wait until she stopped to put on my eyeliner or mascara. You know except I didn't!

Daisy's party was an absolute blast! She went all out and rented out room at a local venue with a bartender and a buffet and a DJ. I can't even begin to explain how much fun we all had! But I can attempt to show you some of it in pictures. 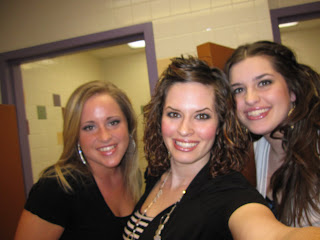 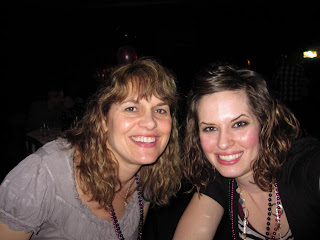 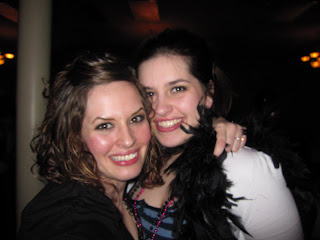 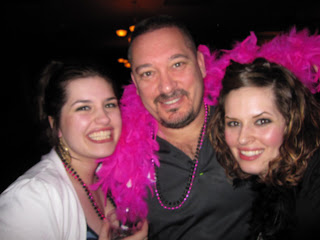 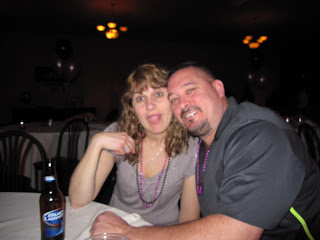 Sunday I miraculously managed to wake up with virtually no hangover, SCORE! I'm thinking it had something to do with switching over to water at 11pm and taking some Tylenol before bed. This is amazing because I always end up with a hangover, even if I only have a couple of drinks.

It's a good thing I didn't have a hangover too because Denise, Caelan, Jen, and Madison were all coming over to hang out before they all headed home. BOO! I hate when everyone heads home. Caelan told us that she had a fabulous time at prom and we spent a couple of hours chatting and catching up. Preston spent that couple of hours licking everyone. That was awesome. Poor Caelan took the brunt of it when I threw her under the bus and told Preston that he could only like Aunt Caelan! That's what Auntie's are for right? Then it was time for everyone to head home. :( Poor Madison didn't want to leave and begged to stay with Auntie Kim forever, but she eventually realized that even though she loved me sooooo much she would miss Mommy so she opted to head home too. Well she didn't actually say any of that being that she's only five months old but I know she was thinking it!

Everyone left and we watched movies the rest of the day. Or more accurately I took a nap and Brad and Preston played on the iPad while movies played in the background.