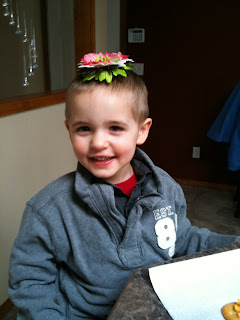 While Madison was in town, I realized that Preston's hair was long enough to hold one of her big headband flower clips. Immediately after putting it on Preston had some thing to say about it.

It was hilarious. But it took some serious work to convince Preston that just putting a flower in his hair did not make him a girl! Ooooops! Looks like we won't be doing that again.

No matter how pretty he was! Ha!

I really hope your next child is a girl....for Preston's sake! haha