I am not the kind of parent who tries to pretend like their child isn't naughty.

Preston does have naughty moments. Some days more than others. He is by no means a perfect angel.

HOWEVER, when he is naughty to other children I do something about it. No matter what. Even when very rarely I do feel like his response to a situation was justified. Ahem. He gets in trouble for breaking the rules. He apologizes. I apologize. When he has been really naughty we leave. The point being that I react.

Why do I feel the need to point all of this out? Let me show you... 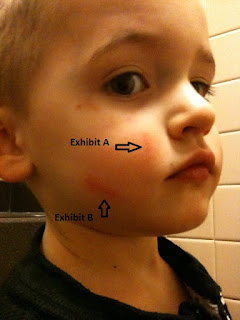 See those scratch marks on my child's face?

How can you possibly miss them! They were done by another child while we were playing at McDonald's!

We went to play at McDonald's on Friday with a friend. The boys were playing nicely and everything was going well. Until Preston yelled down from the tubes and tunnels above that a kid wouldn't stop hitting him.

Did I mention that he yelled it? Yelled it so that everyone in the play area could hear him? Okay, just checking.

I told him not to play by the kid and he went back to playing.

Honestly, I was shocked. Not so much shocked that there was a problem in the tunnels. It happens. Kids are kids. I was shocked that instead of hitting this kid back that Preston yelled down and told me. You see we have been working really really hard with Preston that if someone does something naughty to him that does not mean he can do something naughty back to them. He is supposed to say no thank you and then if the other person doesn't stop he is supposed to tell me that there is a problem. But this is the first time that he has actually done this instead of trying to take the matter into his own hands.

So Preston goes back to playing and I go back to chatting with my friend Kelly, all the while keeping an eye on Preston playing up in the tunnels.

I notice the naughty kid going near him again and start to watch the situation only to see this little shit try to bite Preston, as he is trying to crawl out of the rocket ship because he doesn't want to play by this kid. I yell up that we don't bite in my mean voice and the kid stops and Preston and his friend, Zack, head off to play somewhere else.

By this point I'm irritated. I mean seriously, where are this kids parents?!

Moments later I realize that he's there with his Dad who is sitting one table behind us and not paying attention at all! Really? In less than five minutes his kid has attacked my child not just once but twice and he hasn't noticed at all? And it's not like this happened up in the tubes and no one heard anything. The first time Preston yelled down that someone was hitting him and this Dad apparently didn't think he should check and see if his kid was involved. The second time I actually got up and yelled at his kid and still he stayed in his seat and continued to ignore that his child was being naughty.

And this is all before I've seen Preston's face.

I wasn't even the one who noticed it at first. The boys came down to grab something to eat and Preston was sitting to my right so I couldn't even see that side of his face. Kelly pointed it out to me.

OMG, seriously people it took everything in me not to walk over to that table and tell that Dad he better start watching his kid and show him what his son had done to Preston's face. Honestly, now I wish I had. At least then the Dad would have had to do something. If he just hadn't noticed that his son was causing problems it would have been pointed out to him and if he'd thought he could just ignore that his son was being naughty he would have realized that he no longer had that option.

But I didn't. Instead I fumed and asked Preston if he was okay and when he told me that he was I once again told him to stay away from the naughty little boy.

Did it end there? Nope.

Not much later Zack started crying and I looked up just in time to see the kid running away from the scene of the crime. After Zack yelled down that the kid wouldn't stop hitting him, Kelly told him that the boys could either come down from the tubes or they needed to stay away from this kid. And still the Dad did nothing.

At first I thought that he really was just oblivious to the fact that his son was being naughty. But then his son, who was probably two and a half to three years old, walked over and hit a little boy who was probably all of one maybe one and a half years old on the head with his toy, WHILE HIS DAD WAS TALKING TO HIM! And still this Dad didn't get off his ass or say anything.

I was way beyond irritated by this point. When the boys came down and were playing by our table and the naughty kid came over and started to play by them I very loudly called out to Preston to please come play over by me because I didn't want him playing with that kid. I'm sure the Dad heard me, but I was tired of being nice. Being polite was obviously getting us nowhere.

Now I'm not trying to say that Preston has never been the naughty kid before. He has. I'm not even trying to say that this is the first time that Preston has gotten hurt while we are out playing. But this is the first time that I have really understood the importance of the parent stepping up. Watching this kid get away with being naughty to Preston infuriated me. I'm sure I would have been a little irritated even if this kid had gotten in trouble, I mean nobody likes to see their child get hurt. But I do understand that kids aren't always perfect little angels, Preston isn't so I wouldn't expect other kids to be. But it's a whole different story to watch a child act and behave however they want while their parent sits on their ass and does nothing.

By the time we left I was completely torn. I was so proud of Preston for doing exactly what I have been working so hard on teaching him. Rather than taking the problem into his own hands he told the kid no thank you and when the problem continued he told me. He did exactly what he was supposed to do. BUT part of me, a part of me that got bigger and bigger the longer we sat in the play area and the longer that this kid continued to get away with being naughty, wanted to tell Preston to hit the little shit back. Preston was bigger and he wasn't up in those tubes alone, he was with Zack who was also bigger than this kid. They totally could have taken him. I know that sounds awful but really that's how I felt. It just didn't seem fair that this kid was getting away with hitting and biting my son and that Preston was doing nothing in return because he was following the rules.

Since, I've been telling myself that at least we both learned a lesson. Preston learned about following the rules. And that sometimes it sucks to follow the rules but he proved that he can actually do what he's supposed to do even when I'm not there to remind him. I learned just how important parent participation is when your child is being naughty to another child. It makes a big difference to know that the other parent is doing something to put an end to it. I also learned that next time I really am going to say something. It is completely unacceptable for a child to get away with this kind of behavior and really if my son were the one tormenting other kids I would want to know.

And to think we only went to McDonald's that day for lunch and the superhero toy in the Happy Meal!

Oh Kim, I feel ticked off just reading about it! Next time, yell at the dad, ok?