Last night was a big night in our house.

You see we picked up Preston's big boy bed this weekend.

Which was a little bit of a nightmare.

They'd ordered us the wrong frame and when I called to tell them that I had specifically requested a frame that I could attach his headboard and foot board too they said that they don't keep those in stock. It's going to be between two and six weeks before I can get the correct frame. They did say that they "didn't mind" if we wanted to use the one they'd sent us home with while we waited for ours to arrive. How kind of them. Especially when it took four phone calls to finally get the whole thing figured out. Ugh! Can you tell I was irritated?

Not having the right frame put a little bit of a damper on the excitement of the whole project of setting the big boy bed up. Plus once we'd set the frame up and put the mattress on it and then looked at the headboard and foot board next to it, I realized that we were definitely going to need a box spring. We had originally planned on not using one to keep the bed low to the ground, but I did not love it. So we had to find a box spring. And one that didn't cost an arm and a leg. Which thankfully I was able to do.

Everything was as set up as it's going to get for now on Sunday night and it was time to put the big boy bed to use! 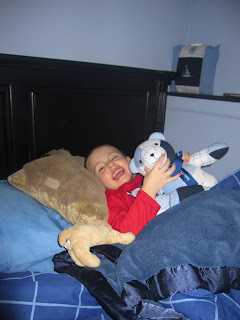 We went through his bedtime routine, only in his bedroom and in his big boy bed this time. Oh the excitement.

And then as we were sitting in the bedroom on his bed all ready for bed, the foot board that was standing unattached at the bottom of the bed fell over. And the headboard that was sitting unattached at the top of the bed banged against the wall every time me or Preston moved. Brad had insisted that leaving them standing wouldn't be a problem, even if they weren't attached. It was and I had to pull them out immediately or it was possible that I was going to lose my mind.

Then after a few minutes in Preston's bedroom I realized that I hated the way everything was set up. Hated it.

Then Brad came down to say good night to Preston and we started talking about how we could rearrange the room. Somehow we went from talking about it to actually moving things around. Preston was so excited that bedtime was being pushed back and even more excited to help move all of his stuff around.

Especially since I slept in there with Preston last night. Only this time I didn't have to sleep on the floor! Praise the big boy bed!

Now we just have to get Preston to sleep in his bedroom in his big boy bed all by himself. Who knows how long that's going to take. This morning for instance, when Preston woke up and I asked his how he'd slept he told me good. But then he told me that he slept in his bed last night and he was going to sleep in our bed tonight. What can I say, the kid is a snuggler and has been sleeping in our bed since he was only a couple of weeks old so it's a big transition for him. One day we'll get there. One day! Ha!

That night will definitely be a big night in our house!

Yay Preston!!! Hope last night went well too. Like you said, at the very least you can sleep in there with him now and not have to sleep on the floor!