You may have noticed in some of the photos that I've posted of Preston recently that he's been sporting a fauxhawk. Totally adorable right? 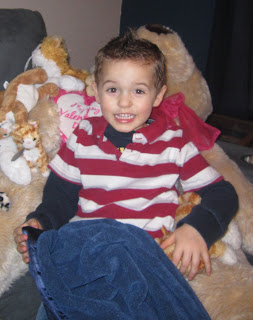 We'd finally decided to grow his hair out so that we could style it. And let me tell you, I didn't think I was going to have as much fun as I was having doing his hair every morning. I was loving it.

Only problem was he desperately needed a hair cut. The sides and the back were getting way too long and starting to stand up all over the place. It was so not part of the new look Preston was rocking.

I took him into Great Clips to have it trimmed up. I figured he needed something simple and really how could they butcher something so simple, they must do millions of men's hair cuts a year.

The good news? Preston sat like a very big boy through his hair cut. There was a moment right after he sat down in the chair that things could have gone downhill quickly, but that moment passed as soon as I pointed out that his cape looked just like Batman's. Once that was pointed out Preston was more than willing to sit in that chair while the lady cut his hair. Hello people Batman is a Superhero, of course he helped me get Preston's hair cut. That's what Superhero's do, they help people!

But the good news didn't just stop there. Oh no. I also found a new product for Preston's hair. We had been using wax to style his hair, but he hated it because the wax pulled on his hair if it wasn't put on just the right way. It was a serious drag. But the lady who cut his hair introduced me to something that was a mix between a wax and a gel. Much easier to use and much less painful for Preston. Score!

The bad news? She butchered his hair. Killed it. Of course since she did his hair before we left it wasn't obvious to me until the next day. But once I noticed it, I couldn't stop staring at it. It was horrible. She didn't fade into the sides so his hair was all choppy on the sides and in the back and it just looked ridiculous.

Did I take him back in to get it fixed?

This is where the story just continues to go downhill. I for some reason decided that this was something I could fix. You know it must have been all the beauty school I attended that made me think that. Oh wait, I didn't attend beauty school. I completely forgot about that detail.

So I took Preston's already butchered hair cut and I went ahead and butchered it some more. You know just in case there was any chance of bringing it back to life, I went ahead and made sure that it was completely dead. Like the kind of dead you can't come back from.

Then I waited a day.

A day of deciding what to do about it. I thought about taking him back in and seeing if there was any way that a professional could save what I had completely massacred. I should point out that I planned on taking him somewhere other than Great Clips, they were dead to me after that first cut.

Finally I just lost it and decided that there was no way that this could be saved. And then I pulled out the buzzers and Preston went back to having hair that can't be styled. 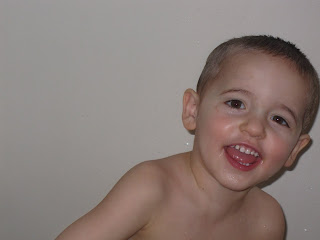 We're now back to growing it out again. Because he just looked so freaking cute in his little fauxhawk!

Lesson learned, next time Preston needs a hair cut I'm taking him to someone who actually knows that they are doing.

Poor kid! It's a good thing he's cute and can pull of either look!

Hahaha...I so would have done the same thing as you! I cut Skip's hair but only because he only wants a 1 or a 2 on the buzzer. That's all I can handle! I can't believe how much older Preston looks with the faux hawk as well! Crazy!