Superbowl is pretty serious in my family. Don't believe me? Check out the sign leading to the "official" game watching area... 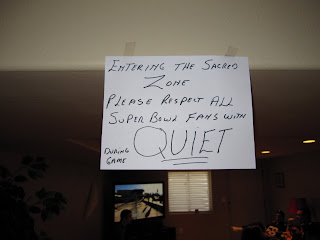 We had a lot of fun, you can't go wrong with food, family, drinks, and football!

I'm not sure if it's obvious what team we were rooting for? 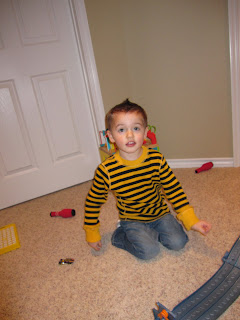 The commercials were awesome. Not as good as other years, I still really love the Doritos one with the little boy from a couple years back. "Don't touch my Mama. Don't touch my Doritos!" But there were some good ones this year. My favorite was another Doritos one, the one with the dead fish, dead plant, and dead Grandpa brought back to life. Hilarious! I also really liked the little boy Darth Vader and the "Timmy" ones with the truck.

Preston didn't care much for the game or the commercials, but he was pretty excited about playing with his cousins. And when he needed a break there were phones to play with and family to snuggle up next to. 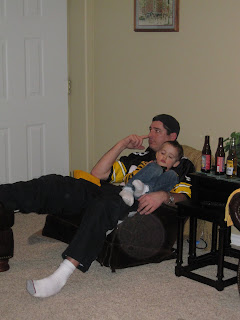 I can't even talk about the game. It was just too depressing. At least they made it to the Superbowl right? I'm trying to stay positive here.

I hope I'm not the only one who had a great time during the Superbowl!

I LOVE that sign! I'm going to have to get one of my own next year! Sad you were cheering for the Steelers:( I like them, but BJ Raji from the Packers is from my town, and Skip went to high school with Ryan Grant, so we pretty much had to cheer for Green Bay. Meredith wasn't that into the game either, but was happy when we set her up in the other room with Ice Age on the computer!

I'm from Chicago so I was rooting for the Steelers to win. It was heartbreaking when our biggest rival won. The Packers can suck it!