Christmas morning Brad and I were so excited that when 9am rolled around and Preston still wasn't up we went about waking him up!

There was some toe tickling, blanket pulling off, kisses, snuggles, and "I wonder if Santa has come?" may have been uttered a time or two. Preston was still acting like he wasn't going to get up anytime soon! Finally I said, "I guess I'm going to head upstairs and see if Santa has been here" and with his eyes still closed Preston whispered, "Me too". That's when I knew we had him! A few minutes later and he was awake enough to actually head upstairs!

And Santa had come! 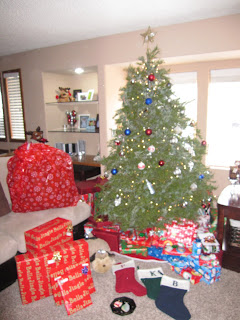 It was time to get started on all those presents! Preston was more than happy to oblige!
Santa must have been a little confused because he brought Preston more than his fair share of gifts, especially for a little boy who spent some time on the naughty list this year! I guess Santa understands that being three sometimes goes hand in hand with being a little naughty. 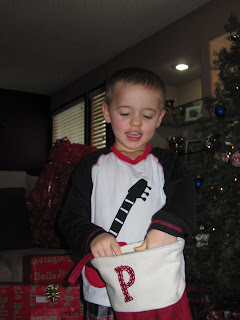 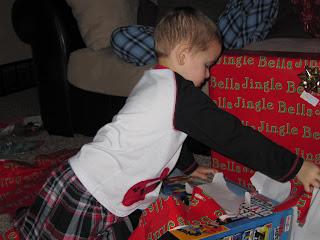 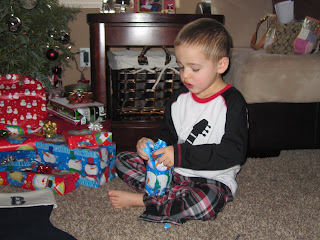 One of Preston's favorite gifts came from Aunt Dru. She got him a bean bag! 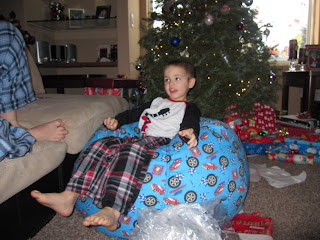 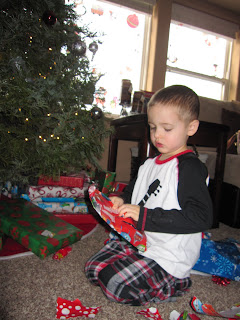 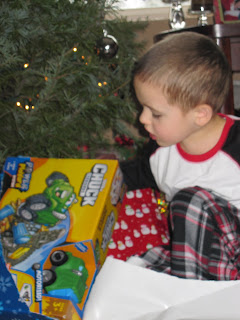 Apparently we'd mentioned Santa a time or two to Preston because even after we finished the Santa gifts Preston still thought everything was from Santa. He'd open a present and excitedly announce, "Look what Santa brought me!". At which point I'd have to tell him that the gift was from me and Brad or my parents or Gigi or my Grandma. It was hilarious. Until I realized that Santa was getting all the credit! 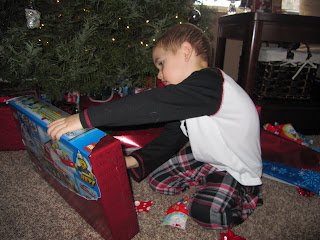 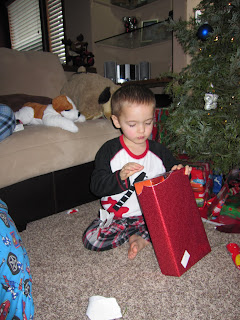 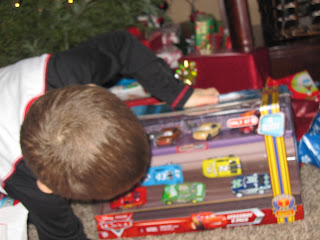 I did start to notice that Preston was much more excited about the presents he didn't know about than the ones he did. A couple of the things under the tree were things that he'd requested while he was out shopping with me, so I'd pick them up and tell them he couldn't have them until Christmas. When he opened them he wasn't as excited, I'm guessing because he'd already known they were coming. 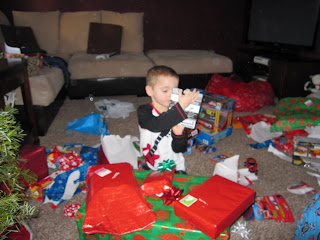 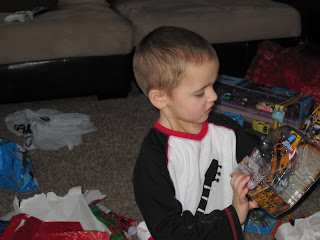 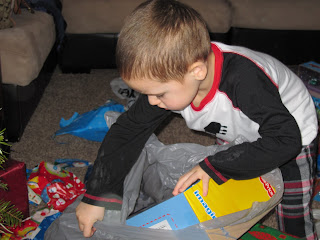 It was hilarious when Preston would come across a box of clothes. He'd open it up, look at what was inside, pass it my way, and announce "Here Mommy, this one's for you". Clothes obviously don't make the cut to a three year old. 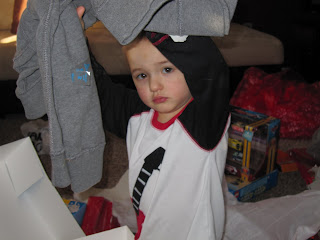 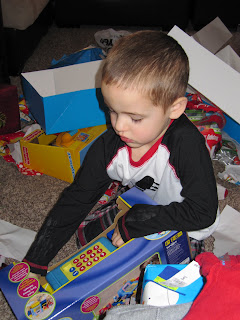 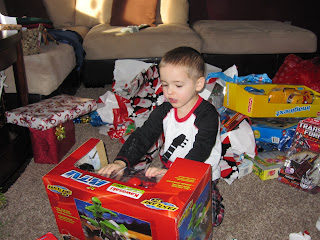 By the time that Preston had finished opening all of his gifts, our living room was trashed. Absolutely destroyed. A mess of wrapping paper and boxes. Mixed in with a cash register, trio's, a remote controlled ATV, a pillow pet, games, Transformers, Hot Wheels, airplanes, a remote control helicopter, Lego's, submarines, a pirate ship, a parking garage, and the bean bag and that's just all I can remember right now. There was just stuff everywhere. 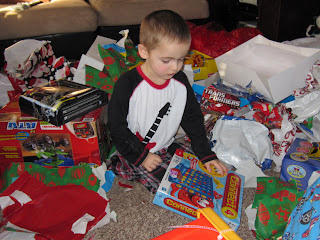 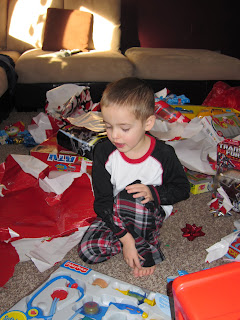 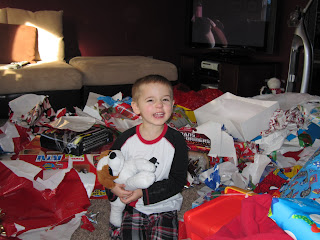 While I cleaned up the wreckage that was our kitchen and dining room from tiling, picked up the wrapping paper in the living room, and tossed the turkey in the oven, Brad and Preston brought the toys into the playroom. And when I walked in Brad had them all lined up on the train table, so we sat Preston down with all of his stuff and took a picture. Now one day when he tells me he never gets anything I'll just pull this picture out and say EXCUSE ME?! Look at this Christmas when you were three! And this isn't even everything, Auntie Jen and Auntie Jessie's presents came later. 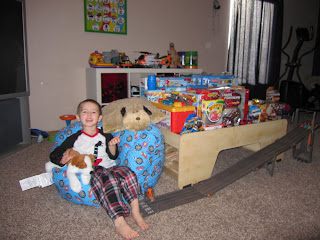 We celebrated the rest of Christmas with family. My parent's and siblings came over, as did Brad's Mom and sister.
We did some gift exchanging amongst the cousins. Hung out. Did a lot of snacking. Figured out how to seat all of us in the dining room. Ate a late dinner. Watched some movies. And mostly just enjoyed spending the day with family.
I got some incredibly adorable pictures of Preston and his cousins, but as this post has already been taken over by pictures I'm going to save those for another post!