We saw Santa twice this year! We needed to get a better picture of him and Preston make sure that he for sure knew what was on Preston's Christmas list.

The first time was at a local nursery. They not only had Santa but he'd brought his reindeer too. Preston really couldn't have cared less about either. He was not digging Santa at all. We walked by a couple of times and Preston just wanted nothing to do with him. He was a little more interested in the reindeer, but really not much. We met our friends Kelly, Zack, and Ryan there and I was hoping that seeing Zack sit on Santa's lap would make Preston want to as well. Ha! Not happening. The photographer didn't want me to set my screaming child on Santa's lap which means that I had to join in on the photo. Fabulous. 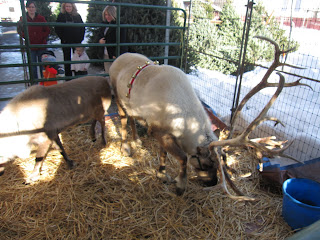 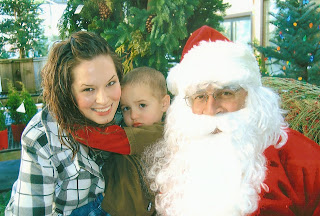 Luckily we had a private party arranged with Santa to try again. My parents had invited him over to meet Preston and Mason. Unfortunately my Dad had to step out right before Santa arrived, so he didn't get to see him. But Preston and Mason did!
To my complete surprise Preston loved Santa. He climbed right up on his lap and told him he wanted a race car with a number five on it. Very specific that child of mine. He took his candy canes and just hung out with Santa. It was absolutely shocking since when we'd seen Santa two weeks before Preston wanted nothing to do with him. 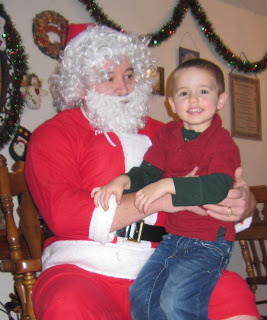 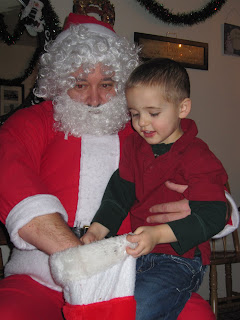 Mason on the other hang wasn't loving Santa. He didn't have an outright meltdown, but he wanted off Santa's lap as soon as possible. 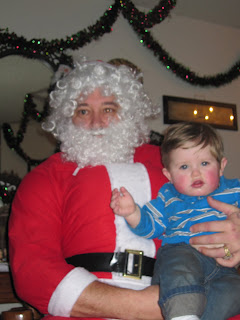 Preston climbed back up on Santa's lap one more time for a photo with both Santa and Mason and then Santa had to head back to the North Pole. 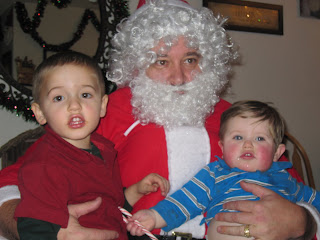 I thought this meant that Preston was cool with Santa now, but when we ran into him at the mall Preston still wanted nothing to do with him. He wouldn't even talk to him!
Hopefully next year Santa will be able to come over to my parent's house again since Preston seems to enjoy having Santa over to Grandpa and Grandma's rather than visiting him elsewhere.

Hahaha, I love Preston...he definitely knows what he wants! Apparently he wants Santa to come to him, he doesn't want to go to Santa. Love it!