Guess what we did today? Oh wait, I basically just gave it away in the title. Ha!

Preston had a dentist appointment this morning. A dentist appointment that we were both dreading. I'm not even sure who was less excited about it. When we talked about it last night Preston told me he didn't want to go and that he wasn't going to open his mouth. And when I told him he had to, I was informed that he was going to HIT the dentist. Awesome. Just awesome. Can you tell why I was so obviously not excited about going to the dentist?

Luckily, for everyone involved, Preston not only DIDN'T hit the dentist he also did great at his appointment! I was shocked. Our last dentist visit didn't go so great. I figured this one would go along those same lines. Preston would refuse to open his mouth and sit in the chair and just overall refuse to actually cooperate with the dental assistant or dentist.

When we first got there he wasn't thrilled. He sat on the chair but refused to sit back. He was quiet and nervous and I figured that was how the whole visit would go. Then he slowly began to warm up. He was willing to let them show him the tools and then started chatting with her. They found common ground over their pets. Preston informed her about our kitties and that two of them can't come in the house because they pee. She told Preston about her big dog that tried to sleep on her pillow. And suddenly they were friends. 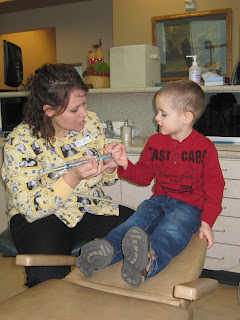 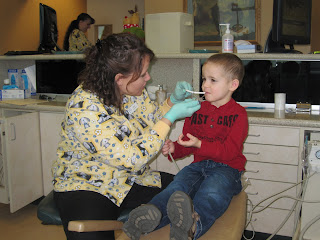 Of course once they became friends, Preston was much more cooperative. He laid down in the chair. And let the dentist count his teeth. And let the dental assistant polish them. And told them all about how we were going bowling when we left. 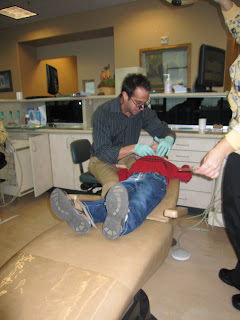 I got to chat with the dentist about how Preston's doing. We're hoping that he'll continue to get better at visiting the dentist and once he's more comfortable we're going to go ahead and try to fill his back molar. The dentist still says it isn't a big rush, so we still have time to get Preston ready but it will eventually have to get filled. I am NOT looking forward to that at all. Preston does not do well with shots and I have a feeling he is not going to love getting his mouth numbed and then having to let them make funny noises in there. But it's gotta get done.

Since Preston did so great at the dentist, we met our friends Kelly, Zack, and Ryan to do some bowling! Preston and Zack both seemed to have a great time bowling. Preston even got a strike! I helped a teeny tiny bit with that one, but still he was so freaking excited that he knocked all the pins down! 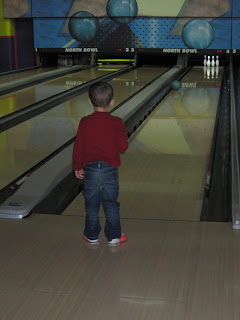 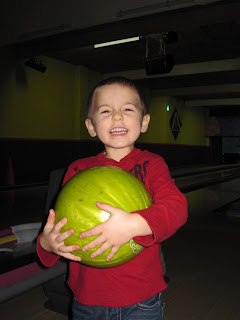 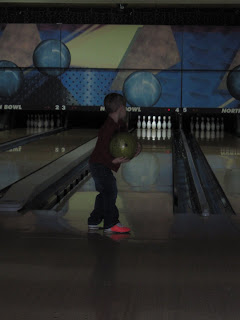 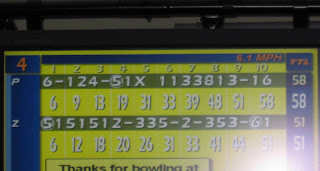 All that bowling left us all starving and we headed over to Burger King to eat and play some more.

You'd think all of that would have worn Preston out...you'd be thinking wrong! Preston was still a ball of energy when we got home. Although he'd worked up quite the appetite after our day and at dinnertime he ate FOURTEEN chicken nuggets! FOURTEEN! Preston usually eats five or six. Not tonight. Tonight he was starving. I also feel the need to mention that yesterday, Preston willingly drank chocolate milk. Preston doesn't like milk and never drinks it. EVER. But last night he decided to give it a go and then decided that he liked it. Hopefully this means that he'll be ready for the New Year's Resolution I've set for him. He's going to start getting whatever me and Brad have for dinner come 2011, no more of this making Preston a separate meal crap. Hopefully it'll be like the dentist and it'll go so much better than I'm thinking it will! Fingers crossed!

You can do it Kim! If I can make eating progress with Amber, then Preston can certainly do it too. Woo hoo!!