Poor Brad's birthday falls around Thanksgiving every year. Last year it was on Thanksgiving and this year it was on Black Friday. The very same Black Friday that I planned to shop. Which meant that Brad was home with Preston the first half of his birthday while I was out shopping. Luckily for him Preston is a late sleeper so at least he didn't have to get up early on his birthday!
I on the other hand was up very very early on Brad's birthday. As were all of my sisters. We had a big sleepover at our house and were all up at FOUR! As in FOUR IN THE MORNING! I should tell you I am not a morning person.
A quick stop at Starbucks and we were on our way.
By 9am, we'd already been to Target, Walmart, KMart, Toys R Us Express, The Children's Place, Kohls, and Macys. Go us! I was impressed!
We did lose Shannon and Marrissa to my Mom at the mall when she promised them breakfast and all me and Jessie could promise them was a trip out to Toys R Us and Fred Meyer. We couldn't even compete.
By the end of the day, I'd finished almost all of Preston's Christmas gifts, all of Mason's Christmas gifts except for one, almost all of Madison's Christmas gifts, half of Brad's Christmas gifts, and completely finished Mason's birthday gift.
All in one day! ONE! And I hadn't even started before that morning.
After the exhaustion set in, we headed back to the house. Only for me to be dragged back out. Brad was getting a new phone for his birthday and he'd been waiting long enough and was ready for it now. Then we headed over to my parent's house so that Brad could play with his new phone and I could play the Donkey Kong game me and Jessie begged my Mom to buy on the Wii. Preston also loves Donkey Kong and will sit and watch with a controller in his hand while you play. It's so cute!
We ended the night with dinner at Olive Garden to celebrate Brad's birthday with my family. YUM! They even brought him out a little cake with a candle! 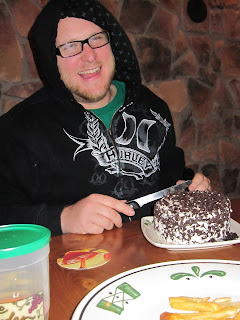 Preston fell asleep on the way home from dinner and was out for the night at 7pm. I followed him not much later and was in bed and asleep by 9pm. I don't even remember the last time I went to bed that early!
Lucky for Brad next year his birthday won't fall on Black Friday so we can do something much more exciting to celebrate!

Wow, I am totally impressed by all the shopping you did! I've never done the early Black Friday shopping thing, though I want to one day. Hope Brad had a good day....I love me some Olive Garden!