I think I'm going to be able to avoid climbing into the pool with Preston! You can't see me, but I am doing my happy dance!
There are a couple of different things that are going to happen at our next lesson.
First, we are going to show up early. Like 15-20 minutes early so that Preston can play in the slow incline area and slowly work his way in at his own comfort level. You see after the most recent lesson, which went a little better than the lesson before it, Preston and his buddy Zack spent a half hour playing in the water. WILLINGLY! For a half hour Preston raced around and splashed and stuck his face in and ENJOYED being in the water. I'm not sure if I was excited that this means that he is clearly NOT afraid of the water or irritated that he is just refusing to participate in lessons because he doesn't feel like it.
Second, after watching how well our last lesson didn't go another lifeguard came over to talk to me. She suggested that perhaps at the next lesson I shouldn't stay. She wanted to know if I'd be up to walking Preston in, handing him to his instructor, and then walking out of the pool area. Preston is obviously not the first child they've had who has a hard time with swim lessons and this method has worked well for them in the past. I'm up for it. Anything that gets Preston in the water. I want him to be able to swim on his own by this summer. Plus I really think she is onto something, Preston would probably do a lot better if I wasn't there.
At our last lesson I attempted to warm him up to the water and the idea of participating in the lesson. Then when he still wasn't loving it, I asked the instructor to take him and see if that helped with him being able to play in the water. At first you could tell he was not loving it. But after a minute or two he calmed down and seemed as if he might be contemplating enjoying it. And then as soon as the instructor set him down he jumped out of the pool and ran over to me. See how me being there might be a problem? 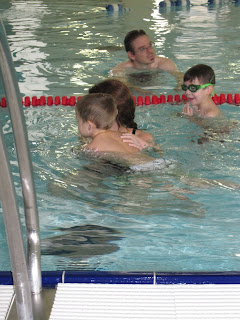 The lifeguard told me that the instructor will just hold onto him during the entire lesson for as many lessons as it takes for him to start to enjoy it and be comfortable. We are still going to try getting there early so he can play and I'm hoping that maybe he'll just be ready if he gets to warm up all on his own before the lesson.
Either way tomorrow's lesson is going to be a big one! One that Preston fully participates in.

Those both sound like great ideas! You will have to let us know how it goes. And if you want to play after lessons you are totally welcome!