That's Preston's idea of sneaky. Telling me to leave him alone.
Obviously I headed into the kitchen to see what he was doing. Where I was promptly stopped. But also given an idea of what he was up to. 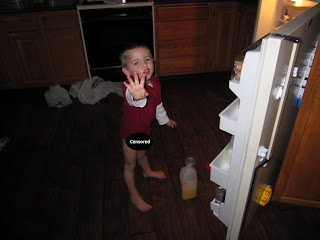 Preston had been told he could not have any more juice that night. Clearly he had other ideas. He had climbed up onto the counter top, grabbed a sippy cup from the cupboard, and poured himself some juice while I watched and obviously took pictures from behind the fridge door. 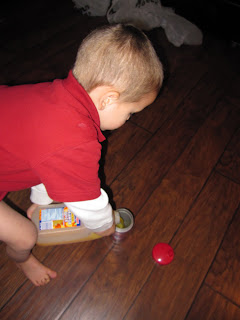 I figure it could have been a lot worse.
I'm also feeling pretty grateful that Preston is still at an age where he warns me when he's going to do something that he's not supposed to!

the censor circle turned out perfect! He cracks me up!