Oh that's right, we went to Seattle. Ummm when was it? Oh yes, a couple weeks ago. It's about time that we caught up on this one.

What did we do while we were there? It's a good thing I took pictures, or I could forget things!

We went to the zoo. I love the zoo. I think it might be because we don't have a zoo. It was just me and Preston as Brad only stayed through the weekend. I went over and over how I wanted to play it since it was just the two of us. We usually bring a stroller. But Preston also usually wants to walk too at some point. That wasn't going to work out with just me. I couldn't push the stroller and walk with Preston when he wanted out. We talked about it, we being me and Preston - he's getting so big now, and he said he could handle walking while we were there and that he would listen.

Miracle of miracles, we survived. We stayed at the zoo for six hours just me and Preston with no stroller. I did have to carry him for some of it. What can I say apparently he does run out of energy. But still six hours without a stroller with just me and Preston. It was kind of exciting that he's big enough that we can now go stroller less.

We checked out the animals. And picked out some favorites. Preston loved the meerkats. Who can blame him they are just so darn cute. We fed a giraffe, Preston's second time doing this. It really is just so cool to see them up close and personal. We played. We explored. We fed the birds. We had ice cream and Preston made more than just a mess. I took pictures. We had fun. 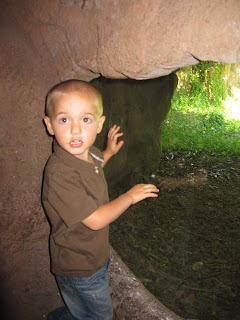 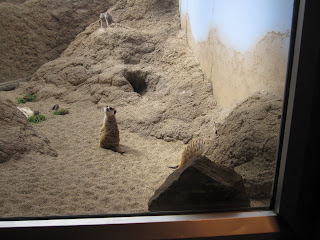 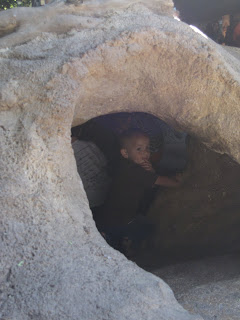 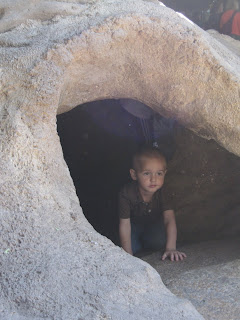 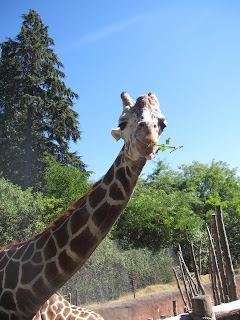 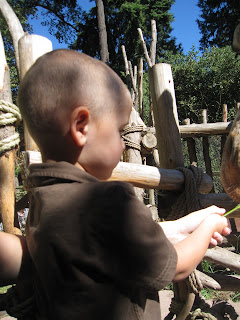 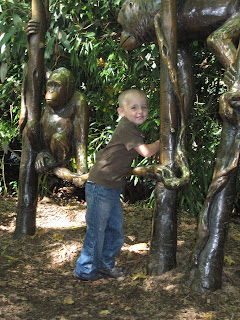 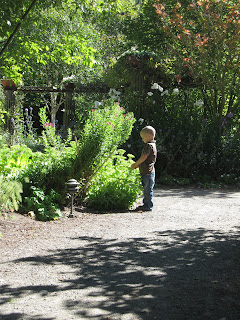 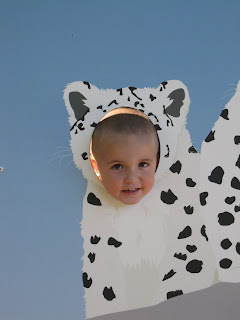 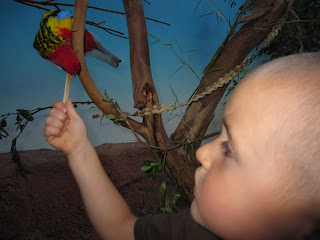 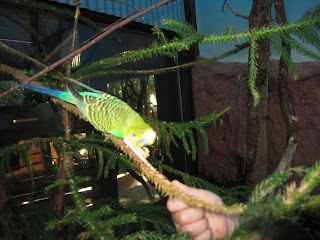 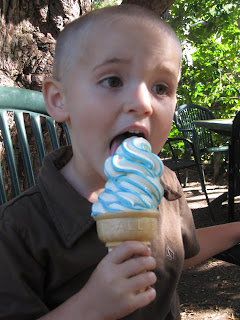 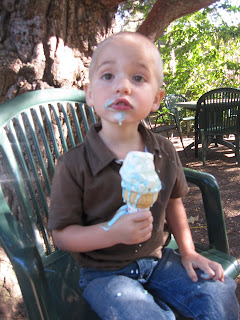 Another day we explored Alki Beach with a friend I used to work with before I had Preston. We ended up picking up lunch and heading to a park to play some more. The park had this little tire swing. Only it was a much more exciting tire swing. You climb up on the platform and then onto the tire. Then you ride the tire down the wire and once you've picked up a decent amount of speed, the tire hits a stopping point on the wire and the rope the tire is hanging from flies forward. Preston loved it. I was so nervous every time he went because when you hit that stopping point and fly forward you really fly forward and I was worried he wouldn't be holding on tight enough. But each time he hung on. He went over and over again. Finally I decided that I needed to try it out. OMG, it is a good thing that Preston went before I did, I honestly don't know that I would have let him do it if I'd done it first. It was terrifying and exciting all at the same time. 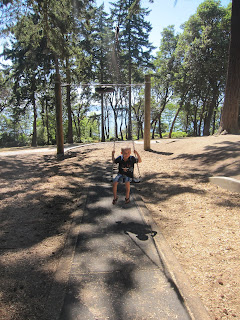 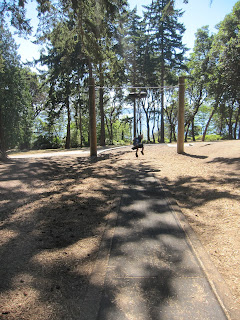 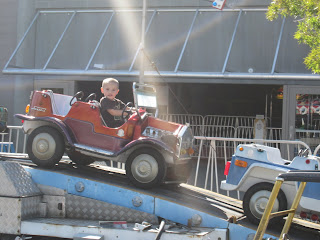 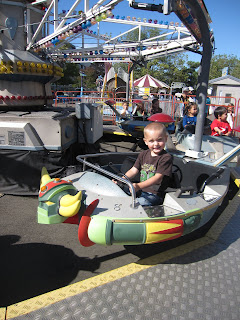 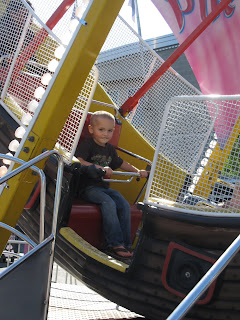 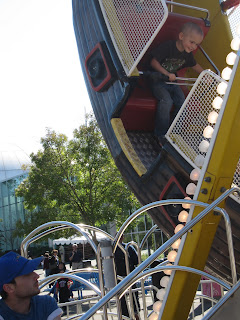 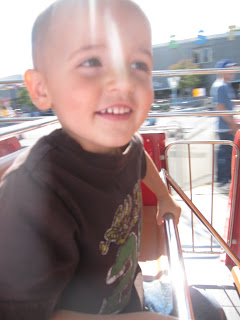 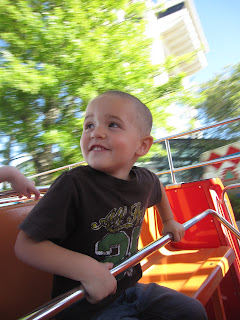 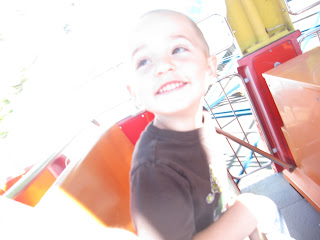 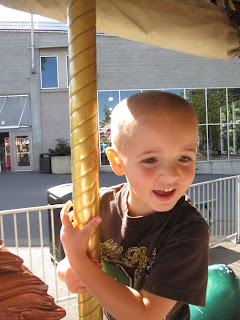 And when the ride tickets were gone, I bought tickets for me and Preston to ride on the monorail. Preston loves trains and always gets so excited about riding the monorail. We took a round trip ride and on the way back got to sit right up front by the driver. Preston also got to honk the horn when it was time to head out. I think that pretty much made the day perfect for him. 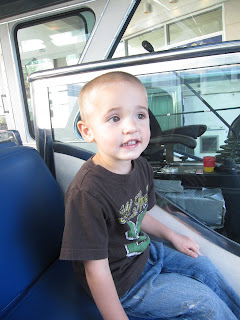 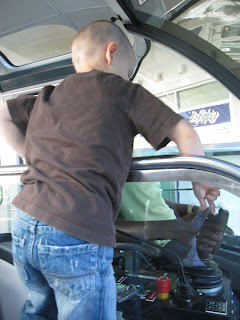 We didn't just explore Seattle while we were there. We also got to spend time with Jen before she has my niece! We shopped for baby gear and clothes. Oh the pink! I loved shopping for little pink things! I got to put the nursery together too. Oh my word people. It was sooooo freaking awesome being able to nest! I don't know if you remember me having mentioned it before or if I've actually mentioned it on the blog but I know that I am not ready for a baby yet BUT I am ready to nest. I just wanted to wash and fold and put away little baby clothes. Put crib bedding in. I wanted to organize little diapers! And put together swings and play pens. I've been ready to do all of the things that come with having a baby, except you know the actual baby part. I'm not ready for that part just yet. But guess what? I got to get that nesting thing out of my system while we were in Seattle!
Eventually though it was time for us to head home. Brad missed us and we'd been there for a week in a half so I'm sure Jen was ready for some quiet before she has a little one of her own making all the noise!

I adore Seattle! Never get up there enough!!!

That swing ride does sound so scary! What a brave little man you have!

Wow, you guys really packed as much fun into your time there as possible! Little M refuses to go in a stroller most of the time now, so most of our activities are stroller-less. It's just me chasing after her the whole time!