Moving the playroom from downstairs to upstairs was part of our to do list for the summer. One of the easier things in fact. Lucky us it is finally complete. We officially moved the two rooms around earlier this summer but still needed a thing or two to finish the playroom up. After our trip to Seattle we got exactly what we needed from Jen. More toy storage. The room is now complete.

Wondering why we decided to switch our large master bedroom into a large playroom and turn our slightly larger than a normal room playroom into our bedroom? Brad was too when I first mentioned the idea. Although I have to be honest it wasn't my idea. When a friend suggested it to me I couldn't figure out why I didn't think of it sooner.

See the problem is that the floor plan was perfect in our house for us when we first moved in and it was just me and Brad. When we got pregnant with Preston all that changed. The master is on it's own floor and that meant Preston's bedroom had to go on a different floor. When I was pregnant this didn't seem like a big deal. When I had Preston the idea of putting him on his own floor sent me into a panic. I kept putting off putting him in his own room and putting it off until finally I just said screw it because it wasn't going to happen. That was a problem too because at some point Preston is going to have to start not only sleeping in his room but also sleeping in his own bed. Which led up to my friend suggesting that we move our bedroom into the room across the hall from Preston's bedroom. It just didn't seem like it would work because I wanted to move downstairs permanently and that bedroom will eventually be the nursery when we have another baby.

Which is how we ended up switching our bedroom and our playroom around. It really was a brilliant idea. I wish that I could take credit for it. You see our bedroom was too big for a bedroom. Does that sound silly? It really was. It was overwhelming. One of the previous owners of our house had taken the two bedrooms and turned them into one giant bedroom with a giant closet. There was too much space and we just didn't have enough bedroom stuff. And in my effort to fill the space I was destroying that I wanted my bedroom to be a comfortable and calming area of our house.

It's really not just a playroom either. It's like another living room with a lot of toys. It has the couch and tv that Brad had years before we moved out. I keep thinking long term with the room and how freaking awesome it is going to be when Preston starts having sleepovers and such because him and his friends have a huge room all to themselves!

Curious about how it all turned out? 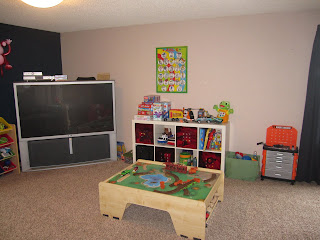 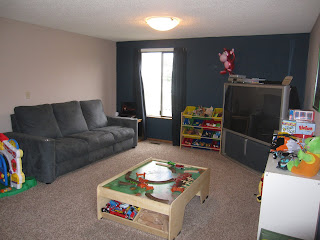 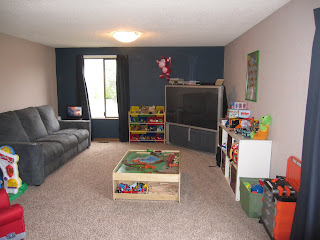 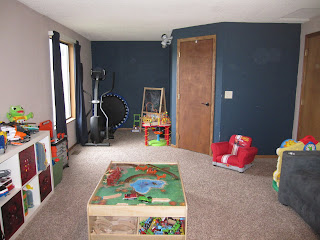 I'm pretty excited to have it all in one place.

I've also decided that we are cancelling Christmas and birthdays next year because obviously Preston has more than enough stuff! Ha!

Love it Kim, it turned out perfect!

I am soooo jealous that your master bedroom was too big! Mine is teeny tiny. You guys did a really great job!