You'll never guess what we did this weekend? Just try. Go ahead.
Did you guess that we went to the movies? I guess that I might have given it away just a little bit.
But we did. All three of us. That means that yes indeed we did take Preston, the THREE year old, to the movies. And amazingly enough he did great.
You see me and Brad were supposed to go to the movies together on Friday night. My Mom had offered to babysit and we were all set to go. Kind of. I told Preston that he was going to go play at Grandma's house while Mommy and Daddy went to the movies. Preston did not love this idea. He informed me that he really want to go. He wanted to go to the movies with me and wanted popcorn too. How he knows that you get popcorn is beyond me because seriously the last time that he went to the movies was like two years ago. But he knows and he wanted to come and he wanted popcorn.
Then I talked to Brad and he was tired and really didn't feel like going. So we canceled. I called my Mom and told her that it wouldn't work but thanks for offering.
When Brad got home Preston very excitedly told him we were going to the movies. Um what?! Clearly there was some confusion on Preston's end. But that confusion was enough to make Brad decide that he was up for a movie now. Only this time instead of it just being me and Brad it was going to be me, Brad, and Preston.
I was nervous. Preston is not exactly a calm three year old. Ha! That's the understatement of the century. But I figured what the hell let's see if he'll sit through a movie. We decided to see Despicable Me and I found it playing at the theatre at the mall right after dinner time. So off we went.
We ate before in the mall court. I feel that I should mention that Preston ate a chicken strip! Oh yes, that's right, a chicken strip. Mostly the chicken on the inside and he, wait for it, liked it! Add that to the list of things Preston will eat! It is growing slowly but surely. One day the list of foods he'll eat will be bigger than the list of foods he won't eat, ONE DAY!
We then headed into the theatre, where now Preston was not only requesting popcorn but an icee as well. A quick stop to the bathroom and we were in our theatre, just in time for the movie to start. 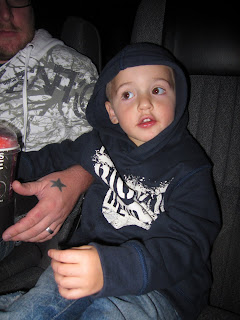 Preston sat great for the first half of the movie. I think the icee helped.
We did have to get up and go all the way down to the very front row at Preston's insistence half way through the movie. We didn't last very long down there. Not because it was so hard to see the movie but because Preston wanted popcorn and it was back up at our seats with Brad. We climbed all the way back up and went up one more row with our popcorn. Where Preston happily sat the rest of the movie. He spent the time asking questions and telling me what was happening in the movie.
I'm so excited that Preston is now old enough to go the movies! I'm sure it helped that we haven't taken him in so long so he was sooooo excited to go, but now that I know he'll sit it looks like we'll be going again!
Only next time we will NOT be going to a Regal theatre. HOLY EXPENSIVE! I'm not even kidding. It was insane how much the whole thing cost. Seriously. It was $8 just to get Preston into the movie. HE'S THREE FOR CRYING OUT LOUD! That's highway robbery. Especially since the theatre by our house is soooo much cheaper. We will definitely plan better next time so that we can not only go to the theatre that is closer but also save A LOT of money for the exact same experience. Only with better food, I think!

So fun! I am literally counting down until I can take Meredith to the movies. She loves popcorn and sits absolutely still during movies at home, so I'm hoping soon!