We attend a huge basketball tournament every year. And I mean huge! In honor of this last year I bought Preston a backpack leash.
Yep, I said it a leash.
I swore up and down before having Preston and even directly after having him that I would NEVER be one of those parents who actually puts a leash of any sort on their child. After all he's a person not a dog. Those words clearly came back to bite me in the ass. 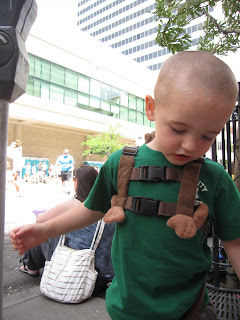 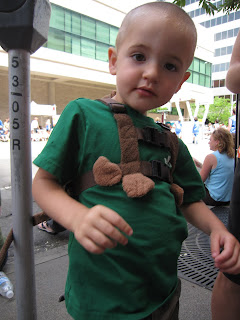 From the moment Preston learned how to crawl I should have known I'd be eating my words. He is most definitely a runner. No doubt about it. I'm not kidding. He started walking at nine months and he was RUNNING from me just a month later!
I've decided he's just adventurous. Curious about everything around him. He wants to see every nook and cranny of a new place. Add in that he seems to have no fear when he's exploring and you've got a recipe for disaster. 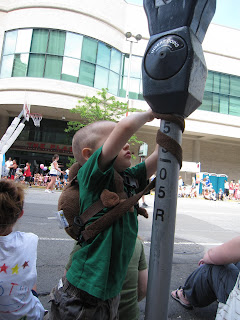 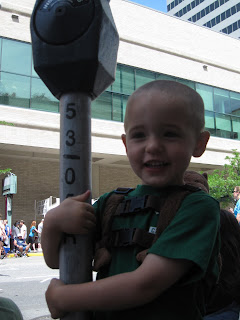 Last year I finally bit the bullet and bought the *cough* leash *cough*. I was freaking out about taking him downtown to watch everyone play when thousands of people were going to be down there as well. I knew that if we were spending the whole day down there I would not be able to keep him in the stroller for all of it. All it would take is a second of him getting too far away from me or letting go of my hand and he could be lost. I started having serious anxiety about it. Enter the leash.
It keeps him close but lets him explore. I feel safe about letting him out of his stroller. And he seems to understand and acknowledge the boundary it gives him. Win-win! 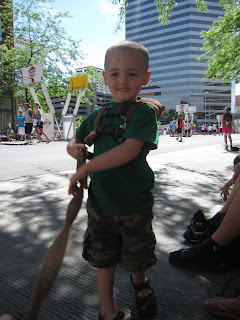 It would be even better if I didn't know what everyone around me was thinking. Especially those that don't have kids. Having been one of them just three years ago, I know exactly what they are thinking and really that's the worst part about the leash. I just have to remind myself that I'll deal with what everyone else is thinking if it gives me the peace of mind knowing that Preston can climb down from his stroller and walk with me and that if he tries to take off or let go of my hand he's not going to be lost forever! After all that's what the leash is for!

Only you know your kid and what he is capable of and what you can and cannot handle or keep up with. Preston is one active kid. I think getting the "leash" was a good choice. Hoopfest is insane and someone could lose their kid in a blink of the eye with the amount of people there. Great job putting the safety of your child before the thoughts of others.

Glad it is working out for you!! Parenting is all about what works for you and your child...not anyone else!