We did A LOT of swimming while we were in California! And I do mean a lot. Both my Grandma and my Aunt have pools and we were all over that.

I mean seriously what else are you supposed to do when it's a 100 degrees outside!?

I had planned hoped that Preston would learn to swim while we were visiting family and enjoying their pools. BUT he was terrified of the water! Maybe terrified is too strong of a word. He was afraid of the water. He would get in, but he would wrap his arms around your neck and try to choke you out!

It was pretty unexpected. He loves the water. Granted last summer it took him a while to warm up to the idea of bigger pools, but still I thought he would do better. We took swim lessons this winter and he loved them. Was a little fish in the water. As soon as we headed out to the pool area though, he was not having it.

Surprisingly, or not so surprisingly, the only person that Preston seemed actually comfortable in the water with was my Uncle. It was surprising because the last time he saw my Uncle was when he was eleven months. So he didn't remember him. Not so surprising because when it comes to water, men make Preston much more comfortable. Last summer when Preston was terrified of the water it was my Dad who got him to enjoy it in the pool at my Grandpa's condo. Then Brad who was able to get Preston to swim and float around our pool. Not me. Not my sisters. Not my Mom. Only the males in our family. Makes me curious as to whether or not Preston would have done better with the pools if my Dad or Brad had come along with us. 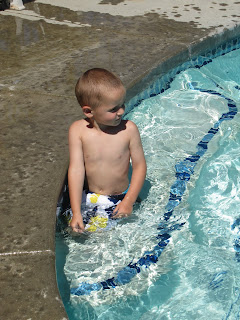 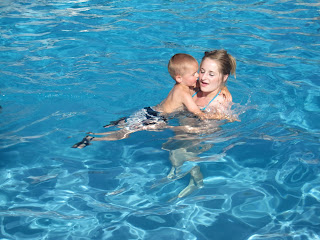 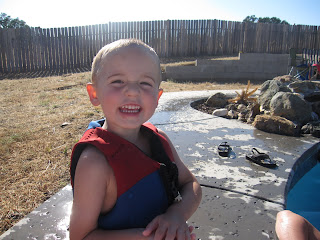 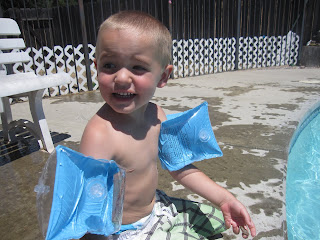 Hopefully Brad can get Preston to enjoy the water before summer ends this year!

That is why you need a hottub. At the party we were at the other day Meredith was so scared of the big pool. But the hottub was much more her speed!