We moved the big tv upstairs!

It was quite the process. It took Brad, my Dad, my brother, and one of my brother's friends. And it took them all about an hour. Just to move the tv from the downstairs to the upstairs.

I'd like to say it was a danger free move, but there were casualties. My Dad's arm got scratched up by the nails in my wall that I hang photos on. My banister got pretty beat up. The walls took a hit when we they attempted to maneuver a too large tv around them.

But they did it.

They would have done it faster and without so much damage if they'd just listened to me and brought it around the back right away instead of trying to make it up the stairs first. But I told myself I wasn't going to say I told you so, okay I am...I told them so!

Instead they fought a hard battle trying to find a way to fit around the banister and up the stairs and they lost. 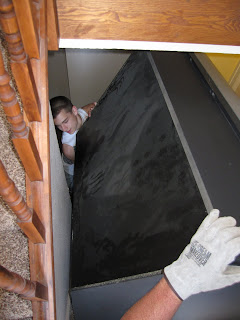 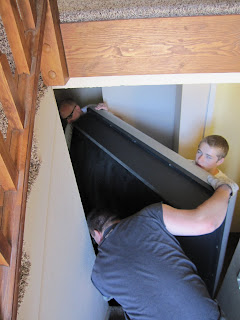 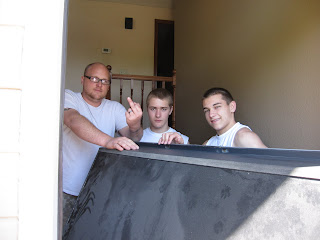 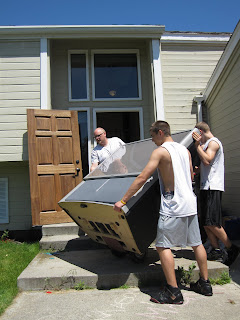 Ending with the tv getting a nice little walk around our house and up our back deck. 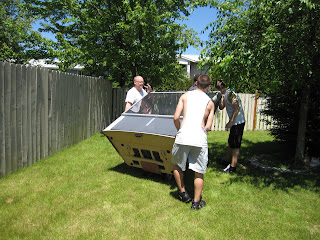 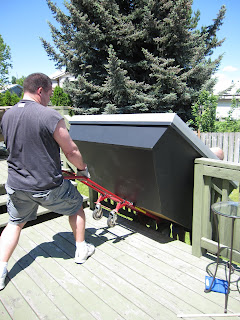 Fortunately it was smooth sailing from there.

And then it found a nice little nook in the new playroom. I guess it really isn't such a little nook, as it is a pretty big tv.

I love the picture of Brad giving the finger. LOL! The TV looks great upstairs too.