We ended our long weekend with a family BBQ at my Grandpa's condo. We do it every summer with my side of the family and this year with all of our crazy schedules we did it in July instead of August. Poor Brad had to work so he didn't get to enjoy all the fun.

It started out a little chilly and I was worried as I'd put Preston in jeans on the way up but in the hour long drive he somehow peed all the way through his diaper and jeans. And Super Mom over here only brought him a pair of swim trunks as extra clothes. So when it got chilly, I panicked. Poor Preston was hanging out in swim trunks and a sweatshirt.

Then it rained. After Preston had crawled through the kiddie pool and soaked not only his swim trunks but his only t-shirt and sweatshirt as well.

We spent the rainy part inside, thank goodness. Where Preston's t-shirt and sweatshirt took turns in the dryer. But Preston wouldn't have cared if he was naked, we did the cake and presents part of the party while we were inside. And Preston knows all about presents now. He was very excited about the presents. It was good that a couple of people had brought his gift to this party instead of his birthday party next month! 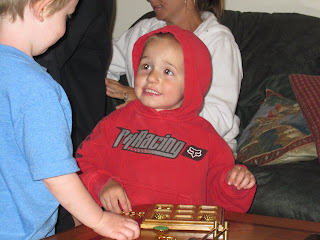 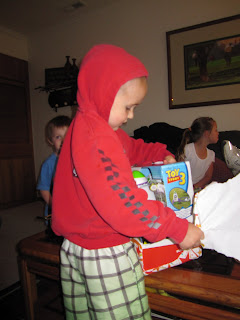 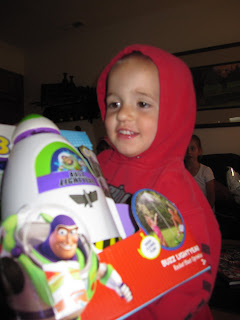 Lucky me after the rain the sun came out! And we all hit the pool. So those swim trunks came in handy. Unfortunately I'd decided it was going to be too cold for swimming and hadn't brought a suit for myself. I had to improvise with a pair of my little brother's basketball shorts and my tank top. I was pretty freaking good looking...NOT!

Preston wanted to swim so bad, but it was still pretty chilly. I think at max it was 75 degrees on Monday. The pool was heated but when you poked out of the water it was cold! Preston climbed in and out of the pool too many times to count. My poor Dad was soaked from wrapping him in the towel and warming him up over and over. That's what Papa's are for though right? 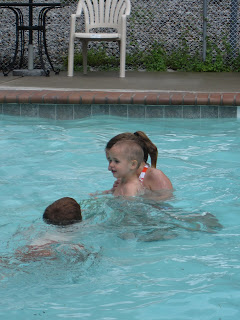 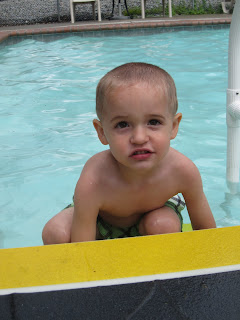 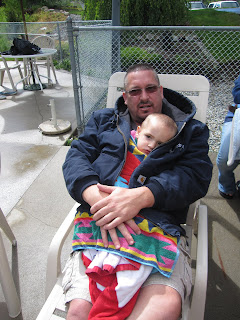 By the time we got in the car to head home, Preston was exhausted and asleep within minutes!