I really feel like we didn't even get a weekend in our house this, well...weekend.
Brad worked ALL day Saturday. And I do actually mean ALL day. He left the house before six that morning and didn't get home until almost midnight! It was a long day. Obviously probably a longer one for him as he worked a sixty hour work week last week and then capped it off with that seventeen hour day Saturday.
Since Daddy was working, Preston and I had to find a way to entertain ourselves. Lucky for us a friend of mines husband was also working. We met up with Kelly, Zack, and little Ryan for a little carnival fun and some lunch. Preston of course had a blast. That is pretty much always a guaranteed thing when he hangs out with Zack. 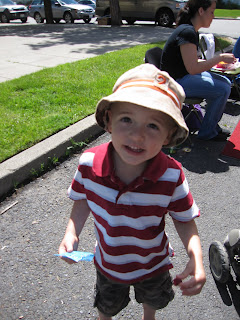 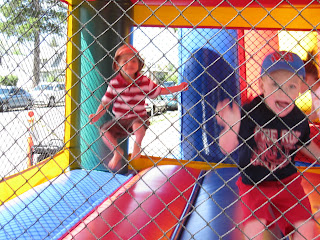 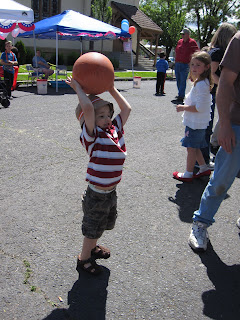 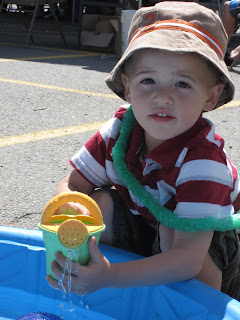 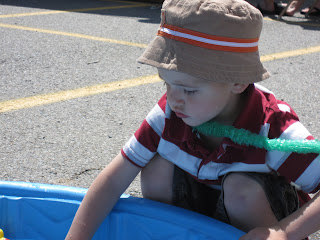 They were being hilarious while we were getting ready to leave the carnival. We were standing in the parking lot with Kelly and I trying to decide where to go for lunch and the big boys tossing rocks into rain puddles. Being that it was a parking lot there were a couple of cars coming and going. When the first one came I had the boys back up against a building and I stood in front of them just to guarantee that they didn't dart out. After that every time one of them saw a car they would yell out "CAR!" and run to the wall for safety. It was so cute to watch and nice to know that Preston was paying attention to all of the times that I've told him he needs to be careful around cars!
We spent the rest of Saturday bumming around. Playing at Grandpa and Grandmas. I ran to a couple of stores. Just trying to pass the time before Brad got home. We didn't realize at that point that he was going to be working such a looooong day.
My sister is staying with us for the week as my parent's house is a war zone right now because they are replacing the carpet all over the upstairs. So I've decided that it is definitely time to put up a spare bed in our house. Somehow even though we have two bedrooms downstairs that aren't really being used for anything we've filled them with crap and none of that crap involves a bed. We took the platform that we'd given my sister last year and moved it back to our house today. Today after Brad woke up, as working so hard yesterday meant he got to sleep in really late today! I'd originally intended to just put an air mattress up on top of the platform and call it good. But tonight after I'd bought some sheets and put it all together I realized that was a terrible idea. The sheets don't fit right. The air mattress isn't comfortable. I want a real mattress. So tomorrow it looks like I'll be looking around for a real mattress.
We're also in the middle of making some changes to both our yard and some rooms in our house, so we went over some of the plans today too. We are going to be making some serious changes to our backyard in the next month or so! It should look awesome by the time it's done! Really awesome! We're also going to be painting some of the rooms inside. Like our living room. I loved the colors we painted it when we moved in four years ago, but not so much now. I'm also going to be painting our playroom because we will be rearranging our living situation soon hopefully! And since we're painting we might as well toss in the bathroom downstairs. I think I'm going to keep busy with all this painting!
Funny story. In an awkward way. While I was at Lowes with my sister looking at paint colors, this couple walked up and were looking at colors next to us. Being that babies seem to draw attention the lady noticed my nephew. And we struck up a conversation. She mentioned that she had a son. And I told her that I had a son. She began to ask me a bunch of questions. My name. Where I went to school. What year I graduated. I started to get a little weirded out and she must have noticed because she told me I looked familiar and she was trying to figure out why. I got her name and thought she looked familiar too, but when we left I still had no idea why. I still have no idea why. But I feel very weird about the fact that she got all of this information about me and I got none about her. I'm seriously hoping she's not some crazy person! I walked away thinking that either I shouldn't give away so much information to a complete stranger or I shouldn't watch so much TV. I'm still not sure which. Ha!
Now the weekend is over. It was only one day, so I'm really not even sure you can call it a weekend. Just like I'm not sure if you can really call this a blog post as it's really just all over the place.