Better late than never right? That's my motto in life! As evidenced by the fact that I am late to just about everything.

We spent Memorial weekend in Coulee City hanging out with Brad's sisters. Memorial weekend in Coulee City is almost a tradition among Brad's family. It's a small town and the rodeo rolls into town, which is why Memorial weekend is such a big deal in Coulee.
Being that I've NEVER been to a rodeo, I wasn't really all that sure what to expect. And I had a lot of silly questions. Such as what to wear. What shoes to bring. What exactly happens during a rodeo.
Rodeo weekend starts out with a parade. Preston wasn't so sure about what was going on at first. He wasn't even interested in the candy. Until he realized that it was uh candy. Candy is quite possibly the way to Preston's heart. Then he was all over the parade. Particularly when Aunt Caelan and friends threw loads of candy his way! Once he got over the shock of having a bunch of teenage girls throwing candy at him that is. 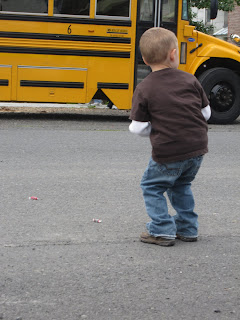 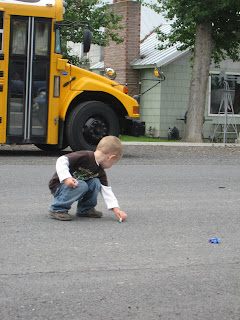 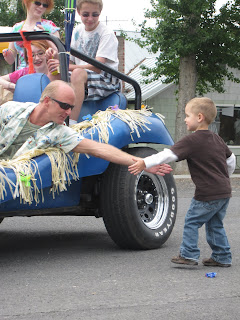 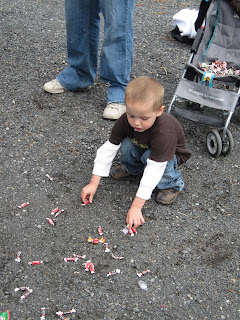 After collecting our candy, we headed over to Great Grandma Geneva's to visit. She has a dog and Preston was beyond excited. Especially when he got a change to take the dog for a walk on a leash. And drag it through the doggy door. Let's just say that poor dog didn't leave Geneva's lap and attempted to avoid Preston after that. Preston was so busy he didn't notice much. Busy collecting all of Great Grandma Geneva's candy from around the house. My little thief! Luckily he was just collecting it not eating it. 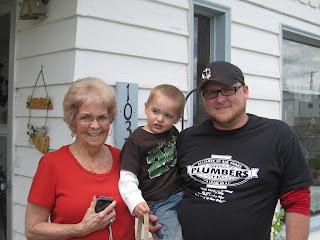 The rodeo started in the afternoon, so from Geneva's we headed to the rodeo. Preston was cranky. I think he was sick of being moved from place to place just as he was starting to get comfortable. Fortunately we were able to get some rodeo food. Rodeo food I have learned is right up there with fair food...it's GOOD! YUM! Preston insisted that he needed a snow cone and we only had to wait a lifetime and a half for it. But he seemed to think it was worth it, for all of one minute and then he moved on. 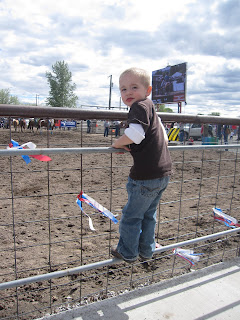 The rodeo was actually much more slower paced than I'd expected. I don't know why. I'd just assumed that it would be back to back action. There were a lot of lulls. Preston was about as interested in the rodeo as he was in his snow cone. It was cool for a minute and then we was ready to explore. Although he did seem to enjoy the bull riding.
My little man seemed to have some understanding of what it was that we were celebrating. When Brad took him over to a little stand to pick something out, they came back with a flag. Of all the things Preston could have picked he wanted a flag! My patriotic little boy!
We finished our day off at Great Grandpa and Grandma Pitts's house. Preston was so excited. He loves going out to the farm. I can't ever imagine why, can you? Ha! 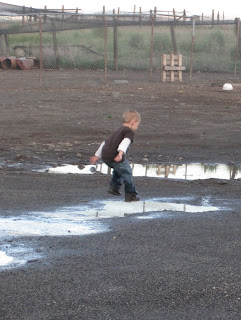 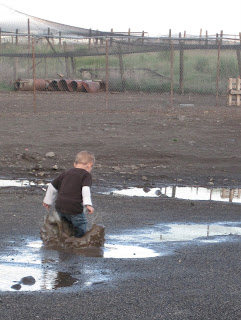 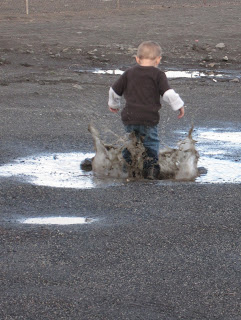 Yes, that is my child. Jumping in rain puddles. He was having such a blast that I just couldn't get myself to stop him. Instead we just stripped him down before we headed back to Caelans. 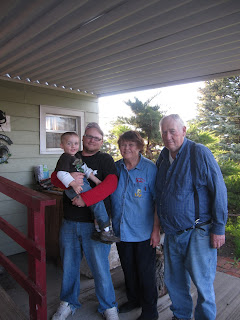 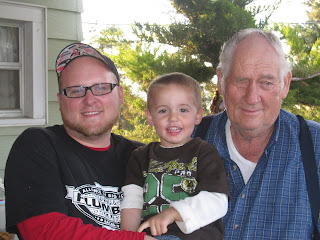 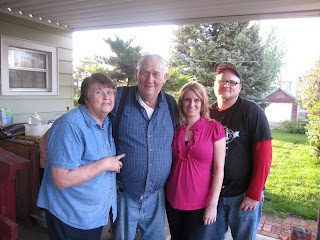 We finished off our second night hanging out with Brad's little sister Caelan. Bbqing and watching some tv. And I tried my hand at french braiding. It was a little pathetic. It's a good thing I have some time to learn before we want to try for another baby! Looks like I'll be practicing on that niece of mine, so here's hoping she has hair! And lots of it!
Speaking of my niece, she moved for me! It could have had something to do with a few threats that I made. I know it's not nice threatening a fetus but I really wanted to feel her move! And it's not like I would seriously stop buying things for her! And it is possible that she has a name. A first name at least. Her middle name is still in discussion. Ready for it? Madison! I love it. I'm so excited she has a name now and I have something to call her. And I completely forgot to take a picture of Jen's belly while we were all in Coulee, so I have no photo of that one for you. Looks like I'll have to request one! Am I the only person who is slightly obsessed with baby bellys?
Of course our weekend ended, as evidenced by the fact that we came home. And spent all of Sunday doing all of nothing. Somehow we were just exhausted. I guess the rodeo and visiting a ton of family in a weekend can have that effect on you! Luckily it was a good kind of tired!

Lots to say on this post!
- I love Preston in the long sleeved t, short sleeved over it look...what a little boy he is!
-You are a brave woman for going to a rodeo. We have nothing like that here and I am glad.
- I also love pregnant bellies...can't wait to see some pics of your sister
-I absolutely LOVE the name Madison! I thought about using it for another girl if we have one, but I don't want to have two girls with names starting with M. Especially because we call Meredith 'M' all the time and it would get really confusing