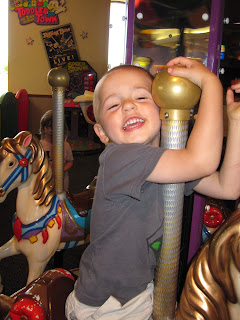 The first for my cousin, Tristan, was at 1pm. The second for Brad's cousins, Ronni and Charli, at 3pm. That means we spent from 1:30pm (we were late, big shocker there!) Sunday afternoon until 6pm Sunday evening at Chuck E Cheese!
The most exciting part of being there of course happened not too long after we'd arrived.
I realized that I hadn't seen Preston in a couple of minutes and went off in search of him. Typically he checks in from time to time while we are there. He needs more tokens. Or help with a game. Or he's thirsty. He may have won tickets. I hear him laughing. Or I simply stand up on top of my seat and see if I can see him. Those kinds of check ins.
He was no where to be found.
Even though I realized that he really shouldn't be able to leave Chuck E Cheese without me and there are a million places he could have been hiding, I started to freak out. I headed over to Brad to ask him for help when I ran into Preston. Preston walking out of the hallway that leads to the bathroom. No wonder I couldn't find him, he wasn't even on the playroom floor! I informed him that we don't play in the bathrooms by ourselves and we headed over to sing happy birthday to the birthday boy.
While standing behind him and singing I went to pull his shorts up and came to notice that my child was no longer wearing his diaper. When I asked him where it went I was informed that he'd gone pee-pee in the potty and that's where his diaper was.
We made a beeline to the bathroom where Brad took the men's room and I took the women's room in search of Preston's diaper.
I found it first. Discarded on the bathroom counter. When I asked Preston if he'd used the potty he once again told me he had and showed me which stall he'd used. Not that it would have been hard to find, the toilets were a little tall so most of his pee was actually on the seat. Or more accurately all over the seat.
We cleaned it up, put a diaper back on, washed our hands, talked about telling Mommy next time, and headed back out to play.
Only I also did a happy dance because Preston not only knew that he had to go potty but he also took it upon himself to head to the bathrooms to do so WHILE HE WAS WEARING A DIAPER AND PLAYING AT CHUCK E CHEESE! I may not be able to put this whole potty training thing off much longer.
*A special thank you to Preston's friend Zack who has renewed Preston's interest in potty training recently. I'm sure that Preston using the bathroom on his own at Chuck E Cheese has something to do with Zack being able to do it when we were there on Thursday. And yes, we were also at Chuck E Cheese on Thursday. What can I say we're Chuck E Cheese fanatics.

YAY PRESTON! That's amazing! Thanks for the shout out to Zack. I know he's glad to help anytime. Keep up the good work buddy!

That's awesome!!! Did he lose interest for a while?

Good job Preston!! That is great that he's showing more interest. Especially while playing at Chuck E Cheese! Do you give him little awards or anything when he goes or just praise? And I love that he just went into the women's room, haha