Brad and I officially began dating. We'd known each other for about a year and a half before, but five years ago today we became an actual couple. 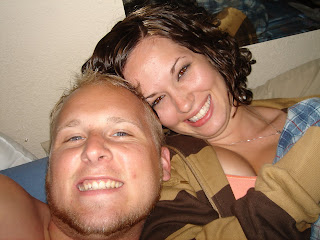 Since then we've bought a house, had a baby, gotten married.
I can't believe it's been five years!
PS. I feel that I should let you all know Brad did attempt to make up for such a crappy Mother's Day on his part. We went to dinner last night at my favorite restaurant. It would have been fabulous except that I found a hair in my food and my appetite seemed to disappear after that. Looks like it's a good thing that Preston did such an amazing job making me realize how lucky I am that he is my little boy on Mother's Day because it just wasn't in the cards for Brad to make my Mother's Day overly special this year! Stupid hair!

Congrats on 5 years of being a couple!