We are BIG fans of Chuck E Cheese around here. BIG fans. I don't think we ever turn down a chance to go.

Preston has even warmed up to the big guy! It was touch and go there for a little bit but now he gets excited when Chuck Chuck appears. 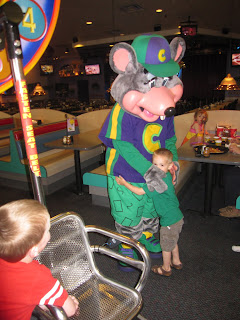 Preston even tried FIVE whole bites of their pizza the last time we were there. This is huge. Preston is not an adventurous eater by any means. Just to get him to try those five bites I had to start prepping him the night before. I informed him that we would only be going if he tried a bite of pizza and he agreed. Once we arrived I held him to it. One bite turned into more bites. All of a sudden we were at FIVE bites! I'm sure promising him more of those little spiders behind the prize counter helped. And granted they were very tiny bites, but they were bites!

Chuck E Cheese is always much more fun with friends! As evidenced by Preston and Zack... 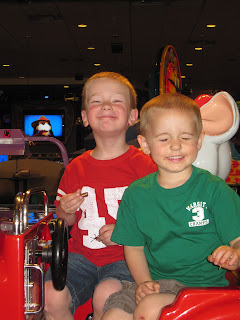 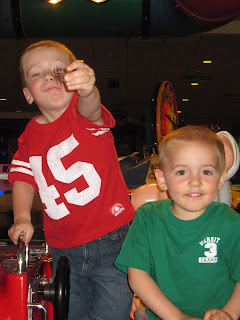 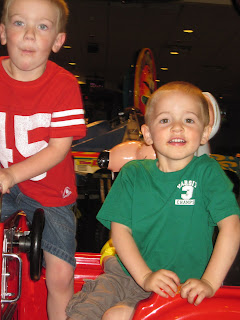 Lucky Preston we are going again tomorrow! Once every two weeks isn't too often now is it? Let's see if we can get to six bites this time! I've already started prepping him for it!

I've got to be honest...I'm kinds nervous to take Meredith to Chuck E Cheese! Is it super crowded all the time with kids just running everywhere? Because that's all I keep thinking about. I don't want to lose her in the crowds! But I do love me some pizza so I know we will head over there one day!