We did Easter Bunny pictures this year. We almost just skipped it because I didn't do it last year so I ruined any ability to make it a tradition. One day Preston will be all grown up and I'll be all, "You have to sit on the Bunny's lap! I don't care that your 16, we do it every year." And that's when it will happen. He will point out that there was the one year that we didn't do it so what the big freaking deal. And I'll have nothing. No reasons. Other than because I said so.

And I'm fairly certain that the picture that year will look a little something like the picture this year. Feast your eyes on this beauty. 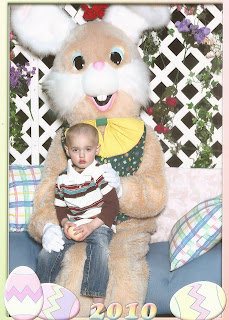 Do you think he could have made it any more clear that he didn't want to be at the mall sitting on the Bunny's lap? I offered french fries. Suckers. Candy. Cars. I bribed and bribed and got nothing. The guy taking the pictures (it's be a stretch to call him a photographer!) told me to try the duck that squeaked. I did, even though I really didn't see it making a difference. He's almost three for crying out loud. But I tried. I'm sure I even looked stupid trying. All for nothing. He refused to budge. Finally I just gave up and asked him, no begged him, to please please just smile. Really fast. It'd be over before he knew it. To which he simply shook his head at me. I realized I'd lost and turned to the guy taking the pictures and told him to just take the picture, it wasn't happening.

Then I paid TWENTY DOLLARS for it! Are you freaking kidding me. And he wouldn't even smile! And I still bought the french fries because it was a little past lunch time and he was hungry.

I've been asking him since if he likes the Easter Bunny and each time his face gets very serious and he says, "NO!".

But we did it. It's not the cutest picture. But still we did it. And I guess him looking pissed is better than him screaming. Right?

I just knew there was NO way Lily would sit on the lap of a giant stuffed bunny. So, we did pictures with a real bunny instead. Maybe next year you should try that since Preston likes animals he might really enjoy that and I personally think the real bunnies are WAY cuter than the obnoxious life size Easter bunny.

OMG, that is priceless!!! What they charge is ridiculous that's why I just snapped my one picture for free. Several years down the road you'll look at that picture and have a good laugh. :D

Kim that is great! A boy who knows what he likes and doesn't like, lol
Danielle

blackmail. that is what we do with pictures like that. It will come in VERY hand in his later years and you will think that twenty bucks was a steal.

Okay, so we are evil parents.