I May Have Freaked Out A Little 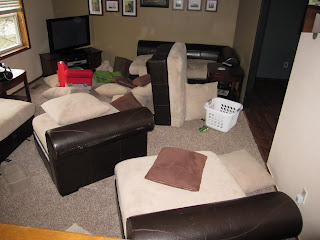 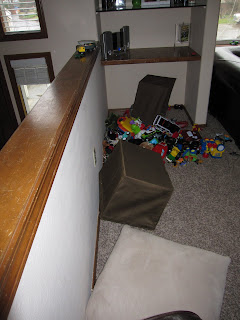 What happened you ask? I lost my camera. Or more accurately Brad and Preston lost my camera. Brad brought it upstairs from where I'd left it. Here's where he went wrong, he gave it to Preston. Then Preston did what Preston does, he played with it.

I even called Brad asking him where he'd left it. To which he responded, "Ask Preston. He was playing with it." I managed to contain my anger at being told to ask the TWO YEAR OLD where to find a $300 camera long enough to get off the phone with my darling husband. Only to still be angry ten minutes and some searching later, so I called him back and yelled and screamed. And felt a little better, but my camera was still missing.

I searched Preston's bedroom. As Preston insisted that the camera was "on the bridge in my bedroom". The bridge being the ledge around his room. When I was through searching and putting Preston's room back together, I made my way to the playroom. From there I moved to my office. Searching and picking up my messes as I went.

Until I reached my breaking point. That just so happened to be when I hit the living room. Not only was I freaking out that my camera was clearly lost FOREVER, but I was also pissed because Preston was taking a very rare nap and I was spending that precious time searching for my camera when I could have been sleeping too!

All of this resulted in me tearing the living room apart. No area was going unchecked. And I was done cleaning up the messes I made while hunting for my damn camera.

After making this mess I headed into the kitchen to take a break and try to calm myself with a glass of water. I'd already decided that we were going to have to replace the camera. And I was trying to figure out how the hell that was going to fit into our budget. I was also trying very hard not to cry about all of the pictures and videos that were lost with my camera.

When something clicked. It wasn't the camera, but it was the location of my camera.

No? Not a one? Alright I'll just tell you. Preston had hidden it under the oven. It's his new favorite hiding place. He's constantly rolling balls under there. Or hiding packs of tissues. Or cars. Or things he's not supposed to be playing with. Apparently my camera happened to be something worth hiding.

I was relieved! I was overjoyed! I found my camera!

There was however one casualty in my search for my camera. 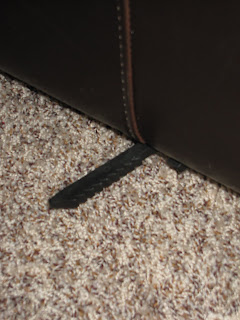 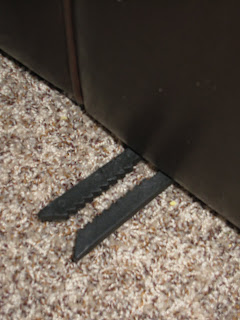 I've already decided that this was clearly not my fault. I was a woman on the edge. Better a piece that connects our couches fall victim during my crazed search for my camera than say, I don't know...a husband.

Kim, that is so funny...A couple of weeks ago, Colten's lost his wallet. I was so upset with his irresponsibility that I tore apart his bedroom looking for it...Dumped his drawers, emptied his closet. It was a disaster!!! Then Trey came and asked me what I was doing..........Then he informed me that he had hid Colten's wallet. BUT HE FORGOT WHERE!!!! Five minutes later he suddenly remembered... It was in the box going to Good Will by the door....Colten was not very happy with us!

Kids come up with the weirdest places to hide things! I love that he was taking a nap as you were losing your mind.

Leave it to the boys to stay cool and not care as the women go nuts. It just isn't fair!

Oh my gosh - I would have been SO update too! I love taking pictures and those are snapshots of our memories, things we can't get back. I'm so glad you found the camera, but I had to laugh as I looked at the pictures, because.... I would have done the same thing. Lock up the camera, from son and hubby!!!